Thousands of troops in Nigeria 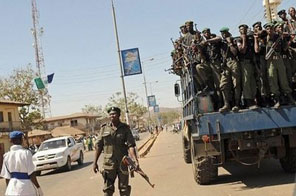 File photo shows anti-riot police on patrol in Jos, Nigeria. Thousands of troops remained on the streets of the Nigerian city of Jos on Thursday to quell clashes between Christian and Muslim mobs that has left about 300 dead. Source: AFP

KADUNA: Thousands of troops remained on the streets of the Nigerian city of Jos on Thursday to quell clashes between Christian and Muslim mobs that has left about 300 dead.

Residents said the troubles eased during the night and authorities relaxed a permanent curfew, letting people leave their homes for seven hours to get food and water.

The government ordered in troops after gun and machete-wielding gangs rampaged across the city. Tolls given by Christian and Muslim leaders and paramedics indicated about 300 dead and hundreds wounded since Sunday.

Tens of thousands of people have taken refuge in military barracks, churches and mosques around the Plateau State capital.

"The situation is calm, fighting has ceased," said David Maiyaki, a resident of Nassarawa Gwom, a predominantly Christian area where the fighting first erupted on Sunday over plans for a mosque.

"It seems it's all over for now, it's calm everywhere, there no-one on the streets except lots of soldiers," said Mohammed Anguarrogo, speaking from his house in northern Jos.

Ezekiel Dalyop, Plateau State information ministry director general, told AFP from Jos, that the decision to ease the curfew was reached "due to the relative calm and peace that have returned to Jos and to enable people to move about to get food and water".

Jos, situated between the Muslim-dominated north and the Christian south, has been a hotbed of religious violence in Nigeria, whose 150 million people are divided almost equally between followers of the two faiths.

The violence erupted on Sunday over plans to build a mosque in a mainly Christian district of the city.

UN chief Ban Ki-moon has expressed alarm over the clashes and appealed for all sides to use restraint and "seek peaceful solutions to religious and other differences in the country."

But some Nigerian cleric on Wednesday said the fighting had little to do with religion and was the failure of the political leadership to address ethnic differences.

#Thousands of troops in Nigeria
You May Also like: