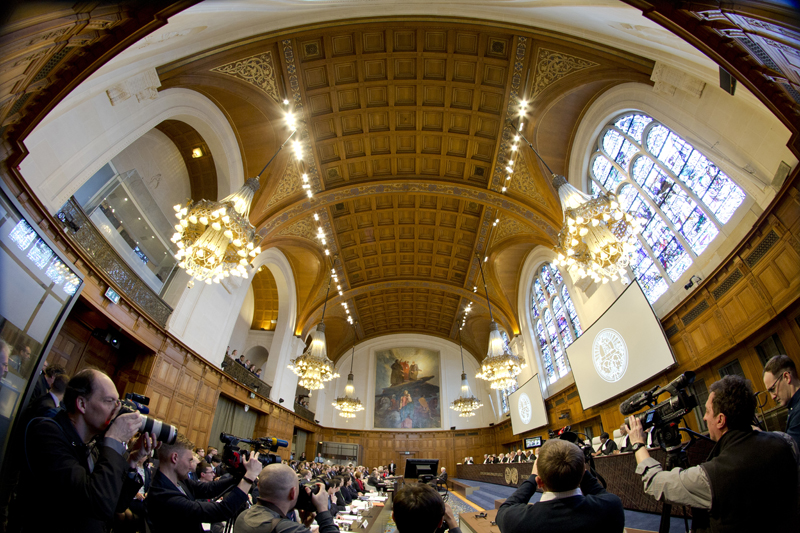 Journalists take images at the World Court in The Hague, Netherlands, Monday, March 6, 2017, where Ukraine is taking Russia to the United Nations' highest judicial organ, accusing Moscow of financing separatist rebels and racially discriminating against ethnic Tartars and Ukrainians in the annexed Crimea peninsula. Photo: AP
THE HAGUE: Ukraine's deputy foreign minister on Monday accused Russia of financing terrorism by shipping arms, ammunition and funds to separatist rebels in eastern Ukraine and of discriminating against non-Russians in the annexed Crimean Peninsula. The charges came as a case between Kiev and Moscow opened at the UN's highest judicial organ. The International Court of Justice case, which also seeks reparations for the 2014 downing of Malaysia Airlines Flight 17, opens a new legal front in the bitter, drawn-out conflict between Russia and its neighbor Ukraine. "This case will send a message about whether the international legal order can stand up to powerful countries that disregard law and disrespect human rights," Kiev's Deputy Foreign Minister Olena Zerkal told the 16-judge world court panel. The Amsterdam-to-Kuala Lumpur Flight MH17 was shot down on July 17, 2014, by a Buk surface-to-air missile over conflict-torn eastern Ukraine, killing all 298 people on board. International investigators have concluded that the Buk missile that shot down MH17 was fired from Russia-backed rebel-controlled territory in eastern Ukraine by a mobile launcher trucked in from Russia and hastily returned there, a finding that Moscow rejects. Calling the downing of MH17 "nothing less than an attack on humanity," Prof. Harold Koh, a lawyer representing Ukraine, warned that if the court did not take action, the missile launcher "could return again to Ukraine tomorrow." The main case, in which Ukraine is asking the court to rule that Russia is breaching treaties on terrorist financing and racial discrimination, is likely to take months or years to resolve. But judges will likely take just weeks to rule on whether to grant the provisional measures sought by Kiev at the hearing Monday. They include an order to halt financing to rebels in eastern Ukraine and to stop discriminating against non-Russians in Crimea. Russia will present its legal arguments on Tuesday. Koh said Ukraine wants the court "to invoke its legal authority to protect innocent Ukrainian civilians threatened by indiscriminate terrorism and cultural erasure."
#Russia #terrorism #Ukraine #Crimea #arms and ammunition #rebel funding #Separatist rebels #UN court
You May Also like: