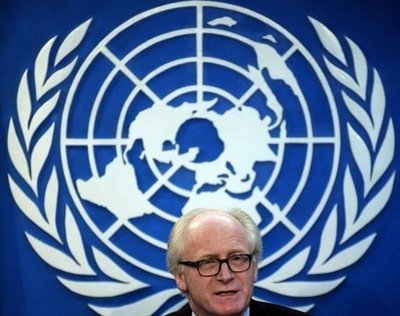 The outgoing UN special envoy to Afghanistan Kai Eide, pictured here in November 2009, has warned that the international mission in the country would fail if the strategy is not changed. Source: AFP

UNITED NATIONS: The outgoing UN special envoy to Afghanistan has warned that the international mission in the country would fail if the strategy is not changed.

Kai Eide told the Security Council Wednesday that he was "deeply worried about negative trends" in Afghanistan, warning they could become unmanageable if not reversed soon.

His statements come despite notable achievements by the world body in the areas of education, health and institution building since US-led forces ousted the Taliban in 2001.

"I am worried about growing impatience in public opinion in donor and troop-contributing countries about the frustration in the Afghan public over what they see as a failure to meet their expectations," he said.

Eide, who is to relinquish his post in March, also alluded to the difficulties NATO-led and Afghan troops were having in confronting the emboldened insurgency.

"If these negative trends are not soon reversed, then there is a risk that they will become unmanageable," he added.

The envoy also urged peace and reconciliation between the Kabul government and the insurgents.

"A peace and reconciliation process must be launched and become an integral part of the political agenda," he noted. "It must be based on the Constitution and must be Afghan-led and Afghan-owned."

"If the insurgency agrees to join a peace process, then this will significantly enhance the prospects of (foreign) troop withdrawals," he added.

But Eide stressed that the Afghan rebels must "distance themselves from the past and embrace the future as well as the progress that has been achieved in Afghanistan."

The world body was ready to promote such reconciliation, he added.

Eide also appealed for a new transition strategy "which can allow Afghans to be in charge of their own future" based on a "systematic buildup of civilian institutions to enable the government to deliver services and the development of the Afghan economy."

"If we do not take these civilian components of the transition strategy as seriously as the military component, then we will fail," he added.

Eide said the London conference on Afghanistan scheduled for January 28 must agree on a "politically-driven strategy where Afghan ownership and capacity stand at the center of our activities."

Eide is to step down as UN envoy after being criticized over his handling of the fraud-marred election in Afghanistan in August.

His tenure has seen the Taliban insurgency reach its deadliest since US-led troops ousted their regime in 2001, spurring international efforts to build democracy and develop the impoverished nation.

NATO and the United States have 113,000 troops in the country fighting the Taliban insurgents, who have spread their footprint over the previously peaceful north and east, inflicting record Western military casualties.

Up to 40,000 more US and NATO troops are to arrive over the course of 2010, backed by thousands of civilians, as the war strategy turns from battleground tactics to development and aid.

#UN envoy warns of Afghan mission
You May Also like: