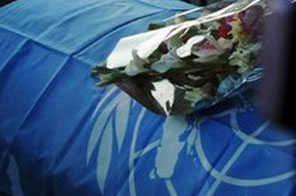 A UN vehicle carries the coffin of a slain staff member during a ceremony at Kabul International Airport on November 3. Five UN staff were killed at the Bekhtar Guesthouse in a terrorist attack in Kabul on October 28. The United Nations is to pull all non-essential foreign staff out of Afghanistan temporarily Source: AFP

KABUL: The United Nations is to evacuate its non-essential foreign staff from Afghanistan after a deadly Taliban attack on a guesthouse for UN workers, a spokesman said Thursday.
Around 600 non-Afghan staff will be temporarily relocated, Dan McNorton told AFP.
"The only people who will remain are regarded as essential staff. This is to ensure the safety of all our staff in Afghanistan," the spokesman said.
Almost all 600 will leave the country although a small number could be relocated within Afghanistan, he added. The evacuations will begin immediately.
The decision would be reviewed regularly and was expected to be effective for "a number of weeks while additional security is being put in place".
In a statement, the United Nations said it was "fully committed to helping all of Afghanistan?s people, as it has been for more than half a century".
"Every effort will be made to minimise disruption to our activities while these additional security steps are being taken," it said.
The move comes eight days after Taliban suicide gunmen stormed a hostel in Kabul during a dawn attack that killed five UN workers.
UN Secretary General Ban Ki-moon held talks with security advisors in Kabul earlier this week in the wake of the attack at the Bekhtar guesthouse.
Speaking in the Afghan capital on Monday, Ban said the UN would not be deterred from its work in the war-torn nation by acts of violence. Related article: Iraq model for Afghanistan
"There has been speculation that the United Nations will evacuate Afghanistan.... We will not be deterred, cannot be deterred and must not be deterred and the work of the United Nations will continue," said Ban.
The UN has around 5,600 staff in Afghanistan, most of whom are Afghans, and the relocations will affect around 12 percent of its mission.
The head of the UN mission in Afghanistan, Norwegian diplomat Kai Eide, was expected to give further details on the evacuation plan at a news conference in Kabul later Thursday.
Eide has been heavily criticised in some quarters over the UN's role in Afghanistan's election which saw Hamid Karzai re-elected president after his challenger withdrew from a run-off and massive fraud marred the first round. Related article: Future depends on karzai
In an interview earlier this week, Eide hinted that the UN's patience was wearing thin with the authorities in Kabul.
"Some Afghans believe that Afghanistan is of such strategic importance that we will stay here whatever happens. It is simply not correct," he told the US public service broadcaster PBS.

#UN to pull non-essential staff
You May Also like: