US calls Gambia crisis 'very dangerous' ahead of presidents' visit 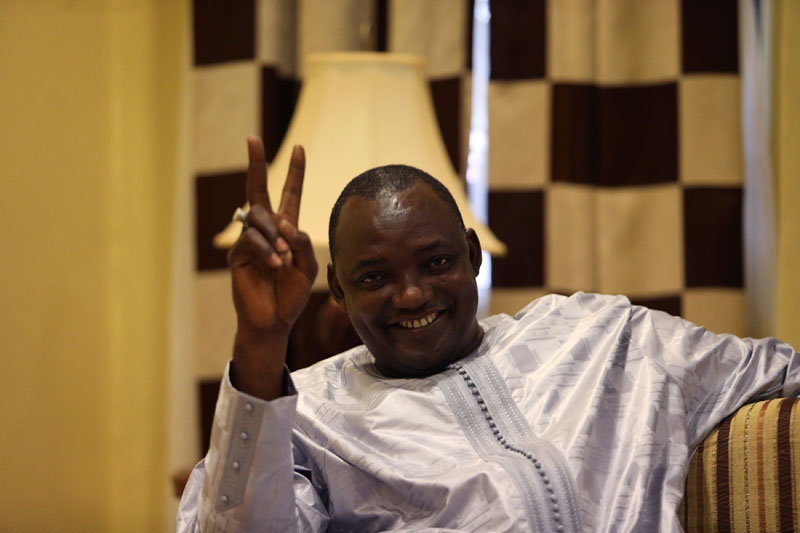 Gambian president-elect Adama Barrow poses for a photo after an exclusive interview with Reuters in Banjul, Gambia, on December 12, 2016. Photo: Reuters
BANJUL/UNITED NATIONS: The United States said on Monday Gambia had reached "a very dangerous moment" as West African leaders prepared to travel there to tell long-ruling leader Yahya Jammeh to accept his election defeat and step down. Jammeh had quickly conceded defeat to Adama Barrow, his challenger in the December 1 presidential election. But in a volte-face that drew international condemnation he rejected the poll results on Friday. His ruling party said he would challenge the election outcome at the Supreme Court, raising the prospect that Barrow's victory, which was poised to end 22 years of Jammeh's authoritarian rule, could be overturned. "It is a very dangerous moment," Samantha Power, US ambassador to the United Nations, told reporters following a closed-door briefing of the 15-member Security Council on the situation in the tiny riverside nation. She said some military officers had sided with Jammeh following his shock reversal. But she added that the Council was unified in its condemnation of the former coup leader's actions. "Everybody is singing from the same sheet of music and the song is clear: you have lost the election, President Jammeh, and you must give up power peacefully," Power said. Liberia's President Ellen Johnson Sirleaf, a Nobel peace laureate and current chair of the West African regional body ECOWAS, is due to travel to Gambia on Tuesday. She will head a delegation of West African heads of state including Nigeria's Muhammadu Buhari, John Mahama of Ghana and Sierra Leone's Ernest Bai Koroma. "These heads of state will ask him to leave power," the foreign ministry of Gambia's neighbor, Senegal, which has taken a particularly aggressive stance toward Jammeh, said in a statement. It called the trip "a last chance mission" for Gambia's president. The United States, European Union, African Union, United Nations and ECOWAS have all pressed Jammeh to respect the election result. Gambia's Communications Minister Sheriff Bojang was not reachable for comment on Monday. "WE WANT PEACE" Barrow told Reuters in the capital Banjul that he expected Johnson Sirleaf's delegation to ensure an "expedited transitional period" that would pave the way for a transfer of power. "We are not talking about a military option. We want to safeguard our democracy and we want peace," he said, but added that he was concerned for his own safety. "I have no official security. As president-elect, I should not be exposed in the way I am today," he said. Barrow said he had not had any communication with Jammeh's government since the president's televised announcement on Friday. Unarmed supporters surround his residence in the capital Banjul as protection and move with him when he leaves his home. Jammeh seized power in a coup in 1994 when he was an army lieutenant and went on to win four elections that were criticized by rights monitors. International human rights groups accuse him of widespread violations and repression. He declared Gambia an Islamic Republic last year and in October announced its withdrawal from the International Criminal Court. Rights groups say Jammeh exerts strong influence over the Supreme Court, which has not held session in a year and a half. There is currently only a sitting chief justice. And so in order to hear Jammeh's complaint, legal experts believe at least four more judges must be appointed. Gambia's bar association on Monday rejected the prospect of a Supreme Court staffed with new appointees to hear Jammeh's challenge and called on its members to boycott the country's courts until he hands over power to president-elect Barrow. "In the present circumstances, any Supreme Court empanelled by the outgoing President Jammeh for the purpose of hearing his election petition would be fundamentally tainted," it said.
#Gambia #The United States #Yahya Jammeh #Adama Barrow #Samantha Power #Ellen Johnson Sirleaf
You May Also like: