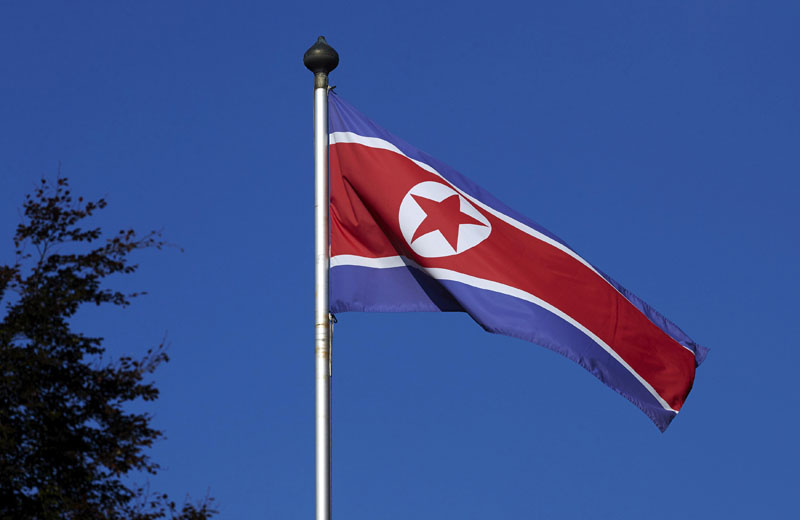 FILE PHOTO - A North Korean flag flies on a mast at the Permanent Mission of North Korea in Geneva October 2, 2014. Photo: REUTERS

WASHINGTON: The US military detected a failed North Korean test launch of an intermediate ballistic missile, the Pentagon said on Saturday.

The test-firing was the latest in a series conducted by North Korea in violation of United Nations resolutions, drawing a fresh US vow to take its concerns to the world body and seek to hold North Korea "accountable for these actions."

The US Strategic Command's systems detected that the Musudan missile failed in a launch conducted near North Korea's northwestern city of Kusong, the Pentagon said in a statement.

It provided no details on what went wrong but said the launch never posed a threat to North America.

"We strongly condemn this and North Korea's other recent missile tests," said US Navy Commander Gary Ross, a Pentagon spokesman. "Our commitment to the defense of our allies, including the Republic of Korea and Japan, in the face of these threats, is ironclad. We remain prepared to defend ourselves and our allies from any attack or provocation.”

South Korea's military said early on Sunday that North Korea fired what it believed was a Musudan missile at 0333 GMT on Saturday but it failed immediately after launch. It did not elaborate on the reason for the failure.

"The North's ballistic missile launch is a clear violation of UN Security Council resolutions and we strongly condemn the North's illegal act of provocation," the South's office of the Joint Chiefs of Staff said in a statement.

Ross said the United States called on North Korea to "refrain from actions that further raise tensions in the region."

The top US diplomat for East Asia said late last month that Washington would speed up deployment of the US Terminal High Altitude Area Defense (THAAD) anti-missile system to South Korea given the pace of North Korea's missile tests, and it would be stationed there "as soon as possible."

South Korea and the United States have agreed to deploy the anti-missile system in the South to counter the North's threat. China, the North's main diplomatic ally, has opposed the move saying it would destabilize regional security balance, but Washington has said the system was not aimed at China.

Daniel Russel, assistant secretary of state for East Asia, also told a congressional hearing the United States was in discussions with international partners, including the European Union, to deny North Korea access to international banking infrastructure after its recent nuclear and missile tests.

Pyongyang is already under heavy international sanctions over its missile and nuclear tests. North Korea conducted its fifth nuclear blast on Sept. 9.

#United States #Pentagon #North Korea #missile
You May Also like: