US journalists break silence of NK 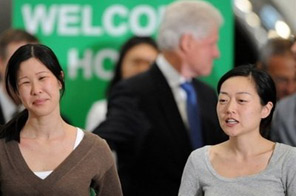 US journalists Laura Ling(L) and Euna Lee(R) arrive from North Korea at the airport in Burbank, California with former US president Bill Clinton(rear) on August 5. The two journalists jailed for illegally entering North Korea spoke about their ordeal for the first time, claiming they were forcibly dragged back into the Stalinist state from China by soldiers. Source: AFP

SAN FRANCISCO: Two US journalists jailed for illegally entering North Korea spoke about their ordeal for the first time, claiming they were forcibly dragged back into the Stalinist state from China by soldiers.

In a lengthy statement posted on the website of the women's employers, Current TV, Lee and Ling said North Korean troops chased them back into Chinese territory and abducted them after they briefly crossed the border on March 17.

"We were firmly back inside China when the soldiers apprehended us," said the women, who had been working on a story about human trafficking in the region at the time of their detention.

"We tried with all our might to cling to bushes, ground, anything that would keep us on Chinese soil, but we were no match for the determined soldiers.

"They violently dragged us back across the ice to North Korea and marched us to a nearby army base, where we were detained."

Lee and Ling said that during the 140 days of captivity that followed they were "isolated from one another, repeatedly interrogated and eventually put on trial and sentenced to 12 years of hard labor."

Lee and Ling said that although there were no signs marking China's frontier with North Korea, they were aware that they heading towards the border crossing as they moved on foot across the frozen Tumen River.

They said they followed their Korean-Chinese guide across the river, who pointed to a nearby village where illegal immigrants were believed to be waiting in safe houses.

Lee and Ling said however that they became nervous and decided to turn back and cross the river back into China.

"Feeling nervous about where we were, we quickly turned back toward China. Midway across the ice, we heard yelling.

"We looked back and saw two North Korean soldiers with rifles running toward us. Instinctively, we ran," they said.

The guide and another producer from Current TV, Mitch Koss, were able to outrun the soldiers but Lee and Ling were captured.

"We didn't spend more than a minute on North Korean soil before turning back, but it is a minute we deeply regret," Lee and Ling said.

The two women hinted at the possibility that they could have been led into a trap by their guide, who had acted "oddly" on the morning of their capture.

"To this day, we still don't know if we were lured into a trap. In retrospect, the guide behaved oddly, changing our starting point on the river at the last moment and donning a Chinese police overcoat for the crossing, measures we assumed were security precautions," they said.

"But it was ultimately our decision to follow him, and we continue to pay for that decision today with dark memories of our captivity."

Ling and Lee said certain aspects of their ordeal remained "too painful to revisit."

However they revealed how they scrambled to destroy notes and damage videotape in a brief moment when they were left alone with their belongings in an attempt to protect their sources.

"With guards right outside the room, we furtively destroyed evidence in our possession by swallowing notes and damaging videotapes," they said.

The women denied statements made by Seoul-based priest Chun Ki-Won -- who assisted the journalists in planning their trip and has said in interviews he warned the women not to enter the area where they were captured.

"Among other things, Chun claimed that he had warned us not to go to the river," they said. "In fact, he was well aware of our plans because he had been communicating with us throughout our time in China, and he never suggested we shouldn't go."

#US journalists break silence of NK
You May Also like: