US lawmakers to quiz military chief 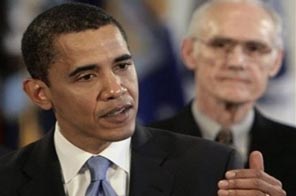 Admiral Michael Mullen, whom Obama renominated to another two-year term as chairman of the US Joint Chiefs of Staff, was to face the Senate Armed Services Committee with leading lawmakers warning against ramping up US force levels.

Most of the criticism has come from Obama's left flank, as Democratic allies have grown increasingly vocal in recent weeks about opposing a troop increase and wanting clear measures for success as well as clear benchmarks to measure success in the nearly eight-year-old conflict.

Obama has been mulling a classified strategic review from the top US and NATO military commander in Afghanistan, General Stanley McChrystal, and is widely expected to decide soon whether to dispatch more combat boots on the ground.

Mullen was expected to take questions on a range of national security issues -- including nuclear programs in Iran and North Korea and Pakistani stability -- but the increasingly sharp Afghanistan debate was likely to dominate.

His appearance before the panel comes days after the committee's powerful chairman, Democratic Senator Carl Levin, said Washington and its allies should focus on building up Afghan security forces before sending more US troops.

Levin, recently returned from Afghanistan, called Friday for redoubling efforts to train, equip and deploy Afghan soldiers before any further expansion of the US troop presence, which is set to reach 68,000 by year's end.

"We should increase and accelerate our efforts to support the Afghan security forces in their efforts to become self-sufficient in delivering security to their nation -- before we consider whether to increase US combat forces above the levels already planned for the next few months," said Levin.

But the committee's top Republican, Senator John McCain, quickly shot back that training more Afghan troops could not at this stage make the difference without added US troops, saying that approach had failed in Iraq.

"We've seen this movie before, it didn't work in Iraq and it won't work in Afghanistan," McCain told AFP.

Republicans say privately that they plan to support any request for more troops but warn that Obama needs to sharply step up his efforts to sell a skeptical US public on the importance of winning the war.

Recent surveys have found a majority of Americans do not believe the conflict is worth fighting -- a conviction likely fueled by spiraling violence and allegations of widespread vote-rigging in Afghanistan's recent presidential poll.

In a bid to soothe some of the concerns, the Obama administration and lawmakers have been working on a series of about 50 benchmarks for measuring success in the war and are expected to unveil them on September 24.

"I don't think there's a great deal of support for sending more troops to Afghanistan in the country or in the Congress."

For the first time, the United States is granting some 600 prisoners held at a US detention center dubbed Afghanistan's Guantanamo the right to challenge their detention, officials said Monday.

Some of the men, many of whom have languished for years at the Bagram Air Base north of Kabul, will now be aided by a US military official to gather witnesses and evidence in their cases, the Defense Department said.

They will then be allowed to defend themselves, and even call witnesses before a military body entrusted with reviewing the cases against them.

But President Barack Obama's administration argued in a filing with the US Court of Appeals in Washington late Monday that terror suspects at Bagram should not be allowed to challenge their decision in US courts, a right the Supreme Court has granted to Guantanamo detainees.

#US lawmakers to quiz military chief on Afghan war
You May Also like: