Vietnam agitators to go on trial 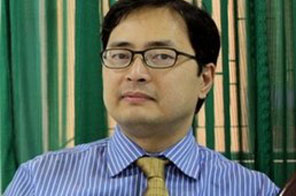 File photo shows Vietnamese lawyer Le Cong Dinh seen at a meeting in Ho Chi Minh City. A group of democracy activists, including Le Cong Dinh, are set to go on trial in the south east Asian nation Wednesday, facing possible death sentences on charges of trying to overthrow the communist regime in a case which has sparked global concern. Source: AFP

HO CHI MINH CITY: A group of democracy activists are set to go on trial in Vietnam Wednesday, facing possible death sentences on charges of trying to overthrow the communist regime in a case which has sparked global concern.

The charges carry a minimum penalty of 12 years in prison and a maximum of death.

It is the most high-profile case in a series of arrests and convictions of dissidents and bloggers in the communist country over the past year.

A fourth man to be tried, Le Thang Long, is accused of being an accomplice. He faces five to 15 years in prison if convicted.

Ahead of the trial, dozens of uniformed police surrounded the People's Court complex in central Ho Chi Minh City, the former Saigon.

The defendants were arrested in the city between May and July last year. An initial accusation of "propaganda" against the state, a charge punishable only by prison, was later replaced by the more severe charge.

Analysts said the arrests were part of a long-running crackdown and reflected the one-party state's sensitivity to perceived foreign enemies.

The indictment, as reported by Thanh Nien, alleges that the three main defendants prepared dozens of anti-state documents and blogs.

It says that Thuc foresaw a "new government" this year and the liquidation of the ruling Communist Party by 2020. Dinh drafted a new constitution, while Trung, together with students in France, established a "democratic youth movement".

The newspaper carried allegations that the accused have links to the banned Democratic Party of Vietnam (DPV).

The DPV has its roots in the Communist Party. It was dissolved in the 1980s but revived in 2006 by Hoang Minh Chinh, a former communist official-turned-dissident who died in 2008.

Dinh's arrest, in particular, sparked concern from Europe, the United States, a global association of lawyers, human rights watchdogs and press freedom groups around the world.

French European Parliament member Nicole Kiil-Nielsen called for Trung's release in a letter to Vietnam's embassy in France, describing him as a "democrat and pacifist". The letter was posted on a blog set up by Trung's supporters.

A former senior official in the Communist Party told AFP that both Trung and Dinh have a good reputation among Vietnam's youth, and authorities fear their ideas could spread.

Their views on pluralism and democracy "are intolerable for the regime," said the official, who asked not to be identified.

Carl Thayer, a Vietnam specialist from the University of New South Wales at the Australian Defence Force Academy, cited another reason.

Dinh's articles and blogs on a wide range of issues "represented a direct challenge to the authority and hence political legitimacy of high-ranking party and state officials", Thayer wrote in a recent academic paper.

Another dissident was jailed for five and a half years last month for attempted subversion. Tran Anh Kim, 60, a former military lieutenant-colonel, was accused of involvement with the Democratic Party of Vietnam.

State media reported months ago that the accused had all admitted their guilt.

#Vietnam agitators to go on trial
You May Also like: