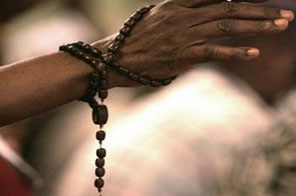 A Rosary hangs from a church-goer's wrist during mass in a Miami church. In what is being described as a miracle, an elderly woman has been pulled alive and singing from the rubble of Haiti's Roman Catholic cathedral, one full week after a killer quake tore the building to the ground. Source: AFP

PORT-AU-PRINCE: Everybody is calling it a miracle: an elderly woman on Tuesday was pulled alive and singing from the rubble of Haiti's Roman Catholic cathedral, one full week after a killer quake tore the building to the ground.

Rescue workers wept and hugged each other as the woman, caked in debris and dust, was placed on a makeshift stretcher, put on a drip, covered with a heat-conserving wrap and driven by truck to a hospital, witnesses said.

"It was an amazing thing to witness, no one could believe she was still alive," said Sarah Wilson, of British charity Christian Aid.

"It seems rescuers were communicating with her and managing to get water to her through a tube. She was singing when she emerged. Everyone clapped and cheered," she added.

Anna Zizi, was rescued by Mexican firefighters at about 3:30 pm local time, two-hours short of a full week after a 7.0-magnitude quake devastated the Haitian capital.

Her rescue gave hope to hundreds of rescue workers still digging for survivors in the ruins of the capital, where the stench of crushed and decomposing corpses filled the air.

Zizi's son Maxime Janvier was interviewed by CNN in the United States shortly after they rescued his mother, whose age he said was 69 or 70.

"I never give up hope, no. We were praying a lot for this to happen," he said of the days of anguish he passed after his sister told him their mother was at the cathedral when the quake struck.

Asked what he did when he was told his mother was alive, Janvier said: "I called my dad (in Miami) to let him know, and he is very happy."

#Woman pulled alive in Haiti
You May Also like: