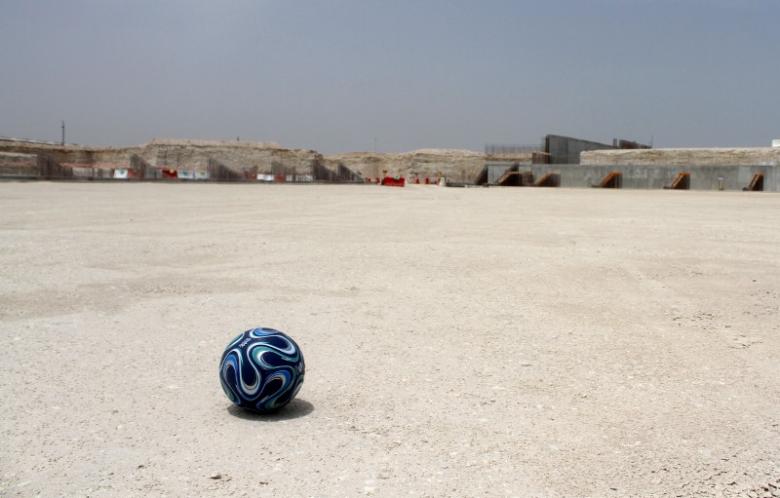 A football is seen at the construction site of Al Wakrah stadium, that is expected to host soccer matches during the 2022 World Cup, in Al Wakrah, Qatar April 12, 2016. REUTERS/Naseem Zeitoon
DOHA: A worker has died in a "work-related fatality" at the site of a 2022 World Cup stadium in Qatar, the country's World Cup organizing body said late on Saturday. The incident occurred on Saturday morning at the Al Wakrah Stadium and is being investigated, Qatar's Supreme Committee for Delivery and Legacy said in a statement. Al Wakrah was designed by the late British architect Zaha Hadid. "It is with deep regret we announce a work-related fatality on one of our projects," said the statement. It did not elaborate on the cause of death. About 5,100 construction workers from Nepal, India and Bangladesh are building stadiums in the wealthy Gulf Arab state which has drawn charges by human rights groups of labour abuse, including poor safety at work and squalid living conditions. The Supreme Committee says there have been no work-related fatalities on World Cup sites, but law firm DLA Piper, in a review for the government in 2013, found evidence of dozens of work-related deaths across Qatar among migrant laborers from South Asia. Qatar's government has also denied claims there are higher instances of heart attacks among construction workers and does not publish independently-verified statistics on worker-related injuries and fatalities. Autopsies and post-mortems on people who die sudden and unexpected deaths are forbidden by Qatari law unless a crime is suspected. The United Nations has urged Qatar to address workers' rights before World Cup construction peaks in 2017, and Doha says that it is working to reduce abuses but that these occur on construction sites all over the world.

It is with deep regret we announce a work-related fatality on one of our projects. Following an incident on Al Wakrah Stadium on Saturday morning, a full investigation is underway to determine the factors which contributed to the death of one of our workers. The relevant authorities were immediately informed and the family of the deceased have been notified. We offer them all the necessary support they may need at such a difficult time.