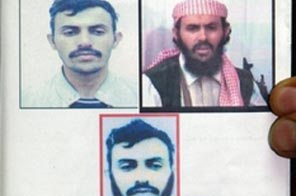 SANAA: Yemen's interior ministry confirmed on Saturday the death of Al-Qaeda's military chief in the country, Qassem al-Rimi, and that of five of his lieutenants in an air strike a day earlier.
There were conflicting reports on Friday about who had been killed and whether any of the eight people targeted had escaped.

In a statement on its website, the ministry said Rimi had died when a missile struck his vehicle in the eastern part of Saada province. Also killed were Ayed al-Shabwani, Ammar al-Waili, Saleh al-Tais, Egyptian Ibrahim Mohammed Saleh al-Banna and an unidentified sixth person.

Late on Friday, after initially having said Waili and Tais had been killed, a senior official said they had escaped.

The ministry did not comment on the fate of the remaining two people targeted.

Rimi was among 23 people who had made a daring escape from a state security prison in Sanaa in February 2006 that left the government red-faced, and he was on a list of 152 wanted suspects.

Banna, also known as Abu Aymen al-Masri, was said to be an "ideologist" of the group.

Friday's operation was the latest in a series of blows since late December, when the government launched its latest campaign against Al-Qaeda. Related article: Yemen wants to strike Qaeda alone

On Tuesday, security forces killed Abdullah Mehdar, said to be the group's kingpin, in Shabwa province, east of the capital.

Provincial Governor Ali Hassan al-Ahmadi said dozens of fighters, including Saudis and Egyptians who had fled Afghanistan, were hiding in Shabwa.

On January 6, officials announced the capture of key leader Mohammed al-Hanq and two other militants believed to be behind threats against Western interests in Sanaa that caused embassies to close for several days.

Yemen has stepped up its campaign against Al-Qaeda militants based in the country since the United States accused AQAP of training a Nigerian youth who attempted to blow up a US airliner on Christmas Day.

#Yemen confirms death of Qaeda chief
You May Also like: