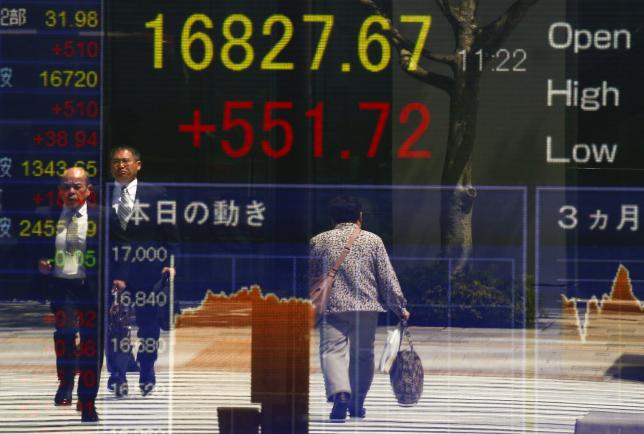 People are reflected in a screen displaying the Nikkei average outside a brokerage in Tokyo, Japan April 19, 2016. REUTERS
SYDNEY: Asian shares reached six-month peaks on Wednesday as a falling US dollar and fading concerns about China lifted commodity prices and risk appetite generally. MSCI's broadest index of Asia-Pacific shares outside Japan added 0.4 percent to territory last visited in early November. Australia's resource-sensitive index rose 0.8 percent to its loftiest level in almost four months. Japan's Nikkei climbed 1.1 percent as the yen retreated, bringing its rally to 10 percent in nine sessions. On Wall Street the Dow ended Tuesday with gains of 0.27 percent, while the S&P 500 rose 0.31 percent to close above 2100 for the first time in 2016. The Nasdaq eased 0.4 percent, while Intel shed 3 percent after hours as its results disappointed. The chipmaker lowered its revenue forest and said on Tuesday it would cut 12,000 jobs globally. Oil prices continued their recent see saw pattern, easing back in Asia after rising strongly on Tuesday. Brent crude lost 58 cents to $43.44 a barrel, while US crude oil eased 73 cents to $40.35. Prices had gained as a strike in Kuwait cut production by 1.7 million barrels per day, partially offsetting the failure by oil producers to agree on an output freeze. [O/R] Copper, iron ore, gold and silver all held hefty gains, with gold reaching $1,250.20 an ounce. That helped lift commodity currencies, and the Australian dollar notched a high not seen since June at $0.7827. Yet the U.S. dollar still rallied on a weakening yen to reach 109.22, up from Monday's trough of 107.75. The euro edged up to $1.1358, from a low of $1.1234 set last week. Traders said much now depends on the outcome of the European Central Bank (ECB) policy meeting on Thursday. In March, ECB chief Mario Draghi unleashed an aggressive package but muted its impact by suggesting there would be no further cuts, giving the euro and unwelcome boost. "Outside of some verbal discomfort at the euro's strength and reiteration that the ECB stands ready to take further action if necessary, it is difficult to see what he can do," analysts at ANZ wrote in a note to clients. "The risks of a further squeeze higher in EUR/USD are significant," they added.
#Asia shares #dollar
You May Also like: