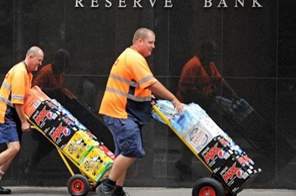 Two workmen delivering soft drink boxes walk past the Reserve Bank of Australia in Sydney on April 6, 2010. Australia raised interest rates by 25 basis points to 4.25 percent and flagged further rises to come as the economy returns to normal after the global downturn. Source: AFP

SYDNEY: Australia announced its fifth rate hike since October on Tuesday and said borrowing costs would continue to rise as growth and inflation return to normal after the global crisis.

The Reserve Bank of Australia (RBA) lifted the official cash rate 25 basis points to 4.25 percent, underlining confidence that Australia has seen off the downturn unscathed and must now work to moderate prices.

"The board judges that with growth likely to be around trend and inflation close to target over the coming year, it is appropriate for interest rates to be closer to average," RBA governor Glenn Stevens said in a statement.

"Today's decision is a further step in that process."

Australia was the first developed economy to lift rates after the world's biggest financial shock since the Great Depression, raising them 25 basis points to 3.25 percent in October and four times since.

The Reserve Bank is now unwinding its emergency cuts of late 2008 and 2009, when interest rates were slashed by 425 basis points to a five-decade low of 3.00 percent as the world economy tanked.

"Australia's terms of trade are rising, adding to incomes and fostering a build-up in investment in the resources sector," Stevens said.

"The rate of unemployment appears to have peaked at a much lower level than earlier expected," he added.

"The process of business sector de-leveraging is moderating, with ... indications that lenders are starting to become more willing to lend to some borrowers."

Treasurer Wayne Swan said rate rises were inevitable given Australia's performance over the past year, when it experienced only a mild downturn and recovered quickly thanks to government stimulus and booming resources exports.

"We have the strongest growing advanced economy," Swan told reporters. "If you look around the world you will seeing that what has occurred in Australia is something very special.

"Australians during this global recession came together. A consequence of working together and a consequence of economic stimulus is a level of unemployment which is the envy of the world."

The government announced emergency stimulus worth more than 70 billion dollars (62.9 billion US) last year, including straight cash hand-outs and grants for first-home buyers as well as infrastructure spending.

Unemployment of 5.3 percent -- well below the peak of 8.5 percent which was projected at the height of the crisis -- and 2.7 percent growth last year have seen Australia's economy tagged "the wonder from Down Under".

Analysts had been divided over whether the RBA would lift rates, despite a rare appearance by Stevens on national television last week warning home-owners to expect further rises.

Commsec chief economist Craig James said the rapid readjustment was far more aggressive than the "gradual" lifting that the RBA has been suggesting.

"It looks pretty aggressive to me. They've earned some time to sit back and assess the impact of the decisions made."

#Australia lifts rates for fifth time since October
You May Also like: