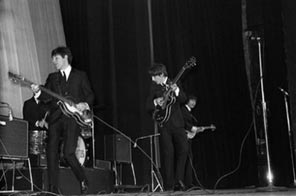 The Beatles perform in 1964 at the Olympia in Paris. US online music service Bluebeat said it plans to fight British recording label EMI over rights to stream and sell versions of Beatles songs. Source: AFP

SAN FRANCISCO: US online music service Bluebeat said it plans to fight British recording label EMI over rights to stream and sell versions of Beatles songs.
Bluebeat.com and sister website Basebeat.com were shuttered on Friday, a day after a judge in Los Angeles granted a request by EMI to bar Beatles tunes from the online venues.
"We are going to come back and fight another day," Bluebeat co-founder and chief executive Hank Risan told AFP. "We think we are going to win in court."
A hearing on whether to remove the restraining order is set for November 20.
In a written ruling issuing the restraining order, US District Court Judge John Walter indicated that he was shown no evidence supporting Bluebeat's claim that it wasn't infringing on EMI's rights to Beatles songs.
"They need to understand that we've done everything lawfully," Risan said. "The works are independent creations done using new psycho-acoustic modeling or simulation."
Risan described the process as creating high-tech versions of "cover bands" that imitate artists' works in virtual environments and add new sounds.
The fact songs may seem to sound identical to original recordings is a trick of the brain, he said.
"Those works do embody the melody very much," Risan said of psycho-acoustic renditions. "But if you compare them against the original CD they sound quite different."
Beatles albums listed at Bluebeat before it was shut down Friday included "re-mastered" works released in September. Songs from a cornucopia of major artists were available at Bluebeat before it was unplugged.
Risan said music at Bluebeat fell in the category of "simulated performances" and that the music service had proper licensing to stream or sell those songs.
"We are not re-recording the songs," Risan said. "The law allows you to mimic, copy and imitate. Instead of having a cover band that looks and acts like the Beatles we do it all in a virtual 3D environment."
In his ruling, Walter brushed aside Bluebeat's contention that it wasn't violating copyright laws.
Bluebeat did not submit any reliable evidence to support its claim that it "independently developed their own original sounds," the judge said.
Walter added that he believed EMI was likely to win its copyright infringement case against the Internet firm.
EMI owns the rights to Beatles recordings and collaborates with Apple Corps on distribution of the music.
EMI said that Bluebeat, which streamed music free and offered MP3 downloads of songs for 25 cents each, is not authorized distribute Beatles tunes.
Apple Corps was the Beatles recording label and is controlled by surviving members of the legendary 1960s-era band and spouses of the late John Lennon and George Harrison.
Apple Corps has been notoriously leery of making Beatles music available for digital download, eschewing even allowing songs to be delivered to iPod or iPhone devices through the globally popular iTunes online store.
Beatles music made a tentative step in September toward a digital future with the release of "The Beatles: Rock Band" videogame devoted to the group's music and performances.
Another step was taken Wednesday with the announcement that EMI and Apple Corps will make a re-mastered catalogue of Beatles music available digitally on limited edition USB drives in early December.

#Bluebeat to battle EMI over Beatles songs
You May Also like: