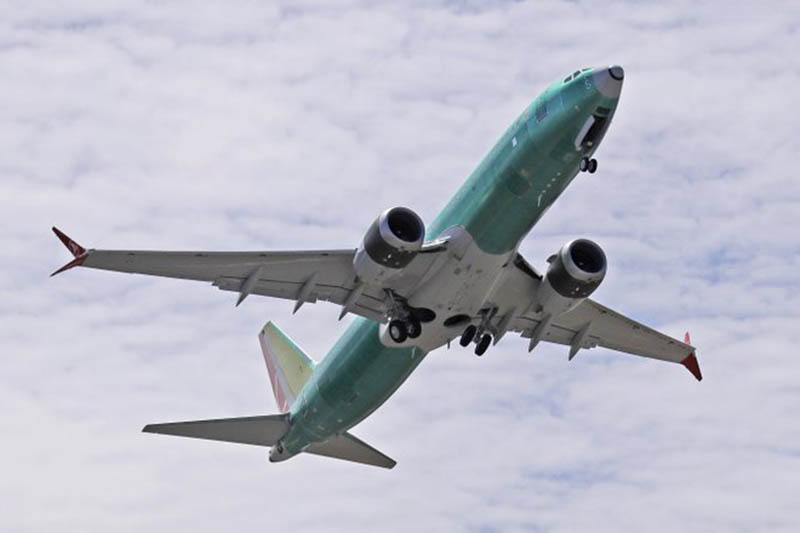 FILE - In this May 8, 2019, file photo, a Boeing 737 MAX 8 jetliner being built for Turkish Airlines takes off on a test flight in Renton, Wash. Courtesy: AP
PARIS: Boeing’s post-crash business slump may be coming to an end. The plane maker said Thursday that it’s in negotiations with several customers interested in buying the 737 Max jet, as it tries to rebuild trust in the plane and its own reputation after two Max crashes that killed 346 people. But rival Airbus is keeping up the pressure, seeking to win over the one and only Max customer Boeing has landed so far since the accidents. While the Max remains grounded pending regulatory approval of a software fix, Boeing Senior Vice President Ihssane Mounir said that several companies around the world are considering new 737 Max orders because “it’s a long-term game, and people would like to get ahead of their plans.” At the Paris Air Show this week, Boeing won its first endorsement of the 737 since an Ethiopian Airlines crash in March and a Lion Air crash in October in Indonesia. IAG, owner of British Airways and several other carriers, signed a letter of intent for a mammoth purchase: 200 Max aircraft worth $24 billion at list prices. While the deal is subject to final agreement, it was a vote of confidence in Boeing as it struggles to win back trust from airlines, pilots, regulators and the traveling public. “We were very glad and very humbled and deeply honored” by the deal, Mounir told reporters, saying the air show came at a particularly “difficult time” for Boeing. Airbus seemed caught off guard by the order — and CEO Guillaume Faury stressed that it’s only a preliminary offer. He said Thursday that the European plane maker “will be very happy to compete” with Boeing to persuade IAG to buy Airbus planes instead. Despite the prospective pickup in business, Boeing is still far from being in the clear over the crash. The findings of investigations into the crashes are still pending, and the company gave no clear sign this week of when regulators could allow the Max to fly again. Both companies had less business than usual at the air show, amid a slowing world economy and trade tensions hurting manufacturers with factories and clients in multiple countries. Overall, Airbus secured more firm orders or promises from customers than Boeing, notably of the newly launched A321XLR single-aisle, long-range plane. Mounir said Boeing isn’t yet ready to launch a similar new plane they called the New Midsized Aircraft, or NMA, insisting his company is focusing “on the safe and reliable return to service (of the 737 Max). We’re working with our customers. We’re working with the regulators and that’s our first priority.” Airline union leaders and famed former pilot Chesley “Sully” Sullenberger told a US congressional hearing Wednesday that Boeing made mistakes while developing the 737 Max — notably by not telling anybody about new flight-control software so pilots could train for it.
#Boeing #737 MAX
You May Also like: