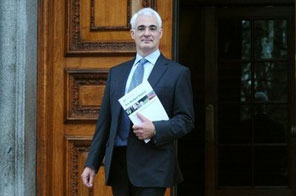 Britain's Chancellor of the Exchequer Alistair Darling poses for photographs with his pre-budget report outside the Treasury, in London, in December. Darling warned on Saturday that Britain faces its toughest spending cuts in two decades if the ruling Labour party wins this year's general election Source: AFP

Darling also confirmed to The Times newspaper that there would be a budget before the election, which must take place by June.

That will quash speculation that Prime Minister Gordon Brown is preparing to call an early election.

Darling, the Chancellor of the Exchequer, said in an interview that severe spending restraints were "non-negotiable" if he is to bring down the 178 billion pound (198 billion euro, 285 billion dollar) budget deficit.

"My priority is to get borrowing down. Once recovery is established, we have to act," he said.

"The next spending review will be the toughest we have had for 20 years... to me, cutting the borrowing was never negotiable. Gordon accepts that, he knows that."

Darling told the newspaper that voters supported his effort to balance the books.

"Most people know that public spending has doubled over the last 10 to 12 years, so we are coming off a much higher base," he said.

"We are not talking about a situation where we have already cut to the bone."

#Britain faces toughest cuts for 20 years: Darling
You May Also like: