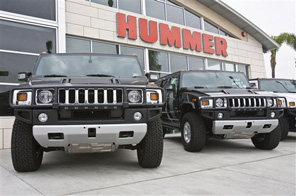 SHANGHAI: The Chinese firm planning to buy the Hummer brand from struggling US auto giant General Motors said Wednesday the domestic market is likely to play an important role in its global strategy.

General Motors announced Tuesday it had reached a tentative deal to sell the brand to privately-held Sichuan Tengzhong Heavy Industrial Machinery Co, a day after filing for bankruptcy.

"The company's strategy is to bring the Hummer brand global and that should certainly include the Chinese market," an official with the public relations agency of Tengzhong told AFP. The agency asked not to be identified.

"It's not just a China-centred goal," the official said when asked if production of gas-guzzling the sports utility vehicle will be transferred to China.

Tengzhong said in a joint statement with General Motors on Tuesday that it will retain Hummer's senior management and operational team, while the sale could save 3,000 jobs in the United States.

"The team intends to expand Hummer's dealer network worldwide, particularly into new and underserved markets such as China," it said.

Tengzhong, based in Chengdu city in southwestern Sichuan province, manufactures heavy machinery equipment for use in road and bridge construction and in the energy industry.

The company, mainly operating in China, currently has no overseas plant and exports only accounted for a small portion of its revenue, according to the official, who declined to provide more details.

#Chinese market key to Hummer future
You May Also like: