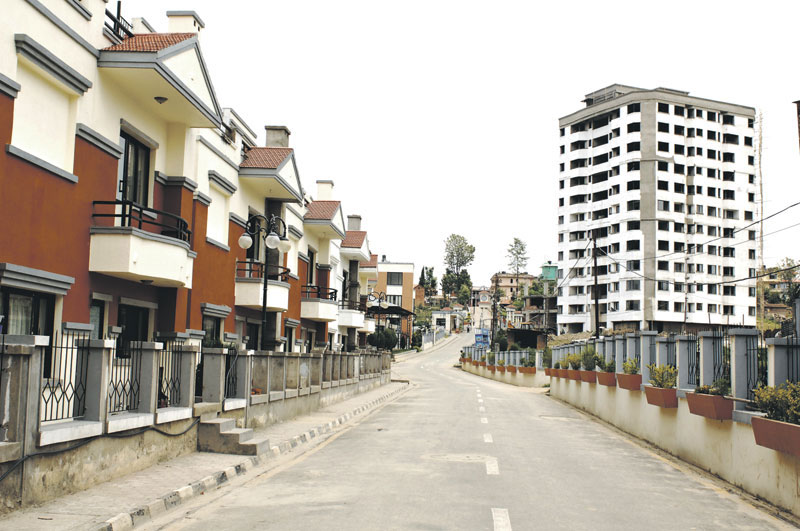 Nepal Land and Housing Developers Association (NLHDA) has appealed the government to focus on policies in the upcoming budget 2015-16 to facilitate the realty sector. As per the Post Disaster Needs Assesment report published by the National Planning Commission, Rs 350.54 billion worth of private housing and human settlements were affected by the April 25 earthquake with Rs 303.632 billion damages and Rs 46.908 billion losses. Although the previous budget had introduced many provisions in favour of the sector, those provisions could not be implemented due to the lack of proper action plan.

Developers have stressed the need to subsidise interest rates on bank loans, easy loan process for reconstruction, and extension of payback time in the upcoming fiscal budget. “Since the government has not been able to live up to its earlier promises, we are urging the government to introduce new provision on foreign investment in apartments,” said Ichha Raj Tamang, President of NLHDA, adding that foreign and domestic investment proportion has to be 49 per cent and 51 per cent. Though the government had already assured that non-resident Nepalis (NRNs) and foreigners can buy houses and apartments equivalent to USD 200,000 and above. However, those provisions were not implemented due to lack

“We have also urged the government to make provisions to subsidise the interest rate on loans at least for a year as apartment projects have suffered the most,” added Tamang. Citing that the valley lies in the seismic zone, he said, “Since we don’t have much area for remodelling the valley, the government should introduce the concept of smart satellite city.”

Complaining that banks and financial institutions (BFIs) are not willing to invest in real estate despite having adequate liquidity, he said, “The central bank has fixed the threshold of 25 per cent exposure in the realty sector. However, BFIs have only exposed 10 per cent.” According to him, the total investment capital being Rs 1.1 trillion, banks could invest Rs 300 billion but they have merely invested Rs 150 billion in the sector.

Citing that housing business has come to standstill after the earthquake, Ichchha Bahadur Wagle, Vice President of NLHDA, said “The upcoming budget should focus on reconstruction so that the industry can revive at pace.” He opined that the loan payback period has to be considered. “The budget should address the unfavourable situation being faced by the developers,” he said, urging the government to exempt them from capital gain tax for this year. According to him, the revised guidelines and National Building Code should be practical to boost the sector in a positive way.

“The budget should focus on new construction rather than reconstruction of settlements,” said Buddhi Narayan Shrestha, President of International Real Estate Federation (FIABCI) Nepal Chapter. Complaining that the government seems to be unwilling to assist apartment owners, he said, “The earthquake has affected apartments the most, the government should provide subsidy on loans for apartment owners too.” Stating that the future of the real estate sector is bright, he said, “Demand in the housing sector will certainly grow in the upcoming fiscal.”