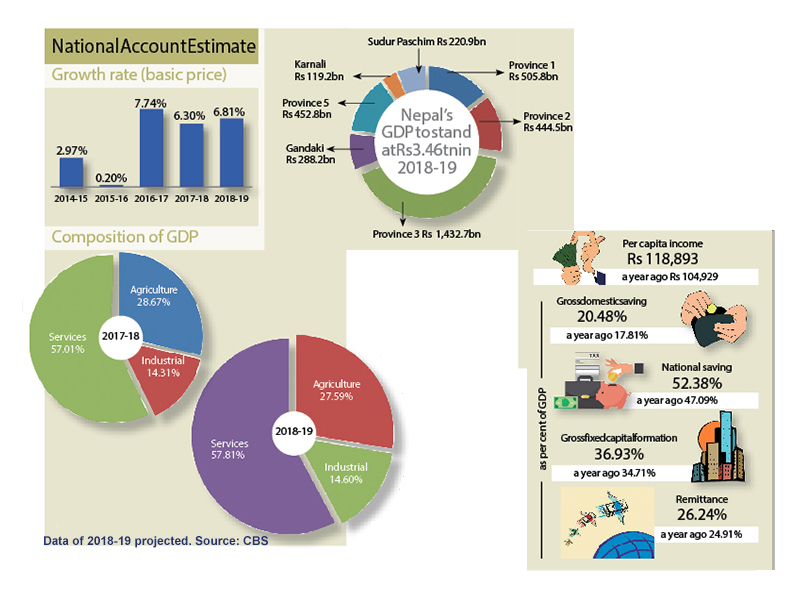 Kathmandu, April 26 Nepal’s gross domestic product is expected to grow at 6.81 per cent to swell to Rs 3.46 trillion during the fiscal 2018-19, as per the Central Bureau of Statistics. Unveiling the National Account Estimates today, CBS stated that though the economy is expected to grow further this fiscal compared to the 6.3 per cent growth achieved in the fiscal 2017-18, the growth rate will be below the government’s economic growth target for 2018-19. Through the budget for fiscal 2018-19, the government had set an economic growth target of eight per cent for the year. However, the government had revised the growth anticipation downwards through the mid-term review of the fiscal budget projecting the economy to grow between seven and eight per cent. Along with the expansion in GDP, per capita income of Nepalis is expected to rise to $1,047 or Rs 118,893 in this fiscal or Rs 104,929 till the last fiscal. For the first time, CBS has calculated the share of different provinces in the country’s total GDP. As per the CBS report, Province 3 has the largest stake in the country’s GDP amounting to Rs 1,432.7 billion or 31 per cent, while Karnali Province has the least share of Rs 119.2 billion or four per cent of the total GDP. Meanwhile, the stake of agriculture sector in GDP is expected to come down this fiscal as compared to its share in the fiscal 2017-18, while the stake of industrial and services sectors in the GDP will increase slightly, shows the CBS report. While the share of agriculture in GDP is projected to come down to 27.59 per cent from 28.67 per cent, the share of industrial sector in GDP is expected to increase to 14.6 per cent from 14.31 per cent. The share of the services sector in the GDP is also anticipated to rise to 57.81 per cent from 57.01 per cent in the last fiscal. “The country is set to achieve economic growth of above six per cent for three consecutive years. It is crucial for us to sustain this growth momentum and ensure further growth of the economy in the coming years,” said Ram Kumar Phuyal, member of National Planning Commission. Launching the National Account Estimates report, Suman Raj Aryal, director general of CBS, said economic indicators in the current fiscal were impressive and focus should be given to sustain this economic growth. Economist Bishwo Poudel said the country’s failure to raise the contribution of the construction and industrial sector to the GDP was unfortunate.