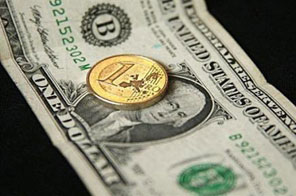 LONDON: The euro hit fresh 14-month highs against the dollar on Monday on signs that China may increase its holdings of the European currency, dealers said.
The shared European unit soared to 1.5064 dollars in Asian trade, hitting its strongest level since August 11, 2008, before falling back. It stood at 1.5035 dollars later in London, up from 1.5007 dollars late Friday in New York.
Against the Japanese currency on Monday, the dollar dipped to 91.76 yen from 92.07 yen late on Friday.
Traders cited an opinion piece by a Chinese central bank official in China's Financial News newspaper, arguing that Beijing should boost its holdings of euros and yen, as a factor behind the currency moves.
"The Financial News, a paper linked to China's central bank, printed a report from a Chinese researcher stating that China should increase its holdings of both euros and yen," said Forex.com analyst Brian Dolan.
"This report helped push the euro/dollar through fresh 14-month highs," he said.
"Inevitably, the report from China was eventually denied as a statement was released stating that the views in the report were the 'fully personal' views of the researcher."
China has invested a large part of its vast reserves in dollar assets, such as safe low-yielding US Treasury bonds, but Beijing has tried to diversify its investments to improve returns amid the global financial crisis.
European Central Bank (ECB) governing board member Christian Noyer declined to comment on the euro's strength at a seminar in Singapore, easing market worries that eurozone officials may step up efforts to talk down the currency.
The dollar has been weighed down recently by speculation that the United States may be slower than some other major economies to raise interest rates. Investors generally prefer the currencies of countries offering higher yields.
"Investors are sceptical whether it will be realistic (for the US Federal Reserve) to end its zero interest rate policy amid current economic conditions," said Chuo Mitsui Trust Bank strategist Yosuke Hosokawa.
"The dollar will continue to be on the weak trend," he said.
The Fed has kept its key rate in a range of zero to 0.25 percent since last December to help the US economy recover from its worst recession in decades.
The ECB has meanwhile frozen its key rate at a record low 1.0 percent since May in a bid to encourage lending by eurozone banks as recovery takes hold.
In London on Monday, the euro was changing hands at 1.5035 dollars against 1.5007 dollars late on Friday, at 137.95 yen (138.16), 0.9207 pounds (0.9201) and 1.5132 Swiss francs (1.5138).
The dollar stood at 91.76 yen (92.07) and 1.0065 Swiss francs (1.0090).
The pound was at 1.6329 dollars (1.6310).
On the London Bullion Market, the price of gold fell to 1,055.95 dollars an ounce from 1,061.75 dollars an ounce late on Friday.

#Euro hits fresh 14-month highs against dollar
You May Also like: