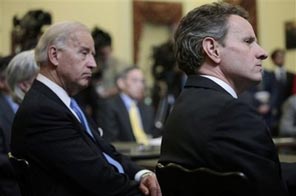 WASHINGTON: Treasury Secretary Timothy Geithner will face fresh questions Wednesday about transparency and his ties to the Wall Street banks he helped save when he testifies before a House panel about the bailout of American International Group Inc. He is unlikely to reveal much.

Lawmakers want to know why Geithner approved decisions that sent billions of dollars from the AIG bailout to big banks like Goldman Sachs Group Inc. Officials from the Treasury Department and the Federal Reserve Bank of New York worked hard to keep the public from learning details about those deals and other AIG decisions.

The money went to banks to buy bonds AIG had insured. The banks already had cash AIG had posted as collateral when the bonds' values declined. In exchange for the money, the banks agreed to tear up AIG's insurance obligations.

The effort to conceal information about AIG began with its first bailout in September 2008, when Geithner was president of the New York Fed and former Goldman chief Henry Paulson was Treasury secretary, according to documents provided by the New York Fed in response to a subpoena from the House Committee on Oversight and Government Reform.

They continued through this month, when Treasury representatives made misleading public statements implying taxpayers would not lose money on the AIG bailout, according to prepared testimony by Neil Barofsky, the Special Inspector General for the Troubled Asset Relief Program, who also will appear at Wednesday's hearing.

In one of the 250,000 pages of documents, a New York Fed employee wrote, "We have specifically told the firm not to disclose" that the other banks were paid in full for the bonds AIG insured.

In an earlier audit, Barofsky found decisions by Geithner and New York Fed officials may have cost taxpayers billions more than necessary because they did not press the banks for concessions. The AIG bailout eventually totaled $182 billion.

The lawmaker who first requested that audit said secrecy at Treasury and the Federal Reserve are undermining President Barack Obama's effort to shore up the sluggish economy.

"When people start to question whether there is transparency, it's hard for the public to be 100 percent on board," said Rep. Elijah Cummings, D-Md.

After meeting with Geithner to discuss his testimony, Cummings said he doesn't expect the secretary to say anything he hasn't already said about the AIG rescue.

In prepared excerpts of his testimony to the panel that were released late Tuesday, Geithner says AIG was rescued not because it asked for aid or to protect interests of other financial institutions.

"We acted because the consequences of AIG failing at that time, in those circumstances, would have been catastrophic for our economy and for American families and businesses," he says in the remarks.

Paulson also is expected to reiterate earlier statements that he didn't know the details or participate in efforts to block disclosure.

Towns' spokeswoman said in an e-mail that the documents already provided demonstrate Towns' "commitment to conducting a thorough and fair investigation."

With Bernanke facing a vote Thursday on his reappointment, Towns' decision not to request additional documents from Treasury or the Fed avoids potentially embarrassing revelations. Bernanke has said he welcomes a full investigation of the matter, and invited an audit by the Government Accountability Office.

Towns' subpoena of the New York Fed was prompted by a Fed move to block committee investigators from accessing documents in Barofsky's office.

The subpoena produced documents that were withheld during Barofsky's earlier audit. He will tell the committee he is investigating why his office didn't receive the details it requested. He has launched a separate investigation into decisions against disclosure.

The New York Fed's lawyers have pledged to cooperate with Barofsky's investigation.

Barofsky and the committee have been probing the AIG bailouts for months. Other congressional leaders, including Finance Committee Chairman Sen. Max Baucus, D-Mont., are weighing their own investigations.

Yet the New York Fed did not provide many of the 250,000 documents until it received Towns' subpoena last week.

Many of the e-mails show outside lawyers for Treasury and the New York Fed arguing for AIG to conceal as much information as legally allowed about "backdoor bailouts," employee compensation and other matters.

Also Tuesday, Rep. Steve Israel, D-N.Y., introduced legislation in the House that would direct Treasury to put online the e-mails of high level employees from the AIG unit whose risky trades nearly brought down the company. That will allow the public to help investigate the bailout.

#Geithner to answer critics on AIG bailout secrecy
You May Also like: