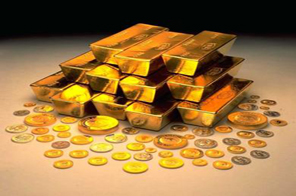 KATHMANDU: The government is suffering a loss of Rs 350,000 in customs duty on a daily basis mainly due to ban it has imposed on the import of gold. At the same time, gold traders are running out of stock which is giving rise to gold smuggling from the Indian border, affecting fair trade here.
It is now a month and five days since Nepal Rastra Bank (NRB) stopped gold import. It has has failed to resume the stalled import. Customs duty was hiked on March 14. The import of gold is at a standstill since February 27.
According to Nepal Gold and Silver Dealers’ Association (NEGOSIDA) president Tej Ratna Shakya, the government has suffered losses worth Rs 70 lakh since the hike in the customs duty some 20 days ago. The government has fixed the new customs duty rate but has not resumed gold import.
Two-thirds of the gold traded in the market is being smuggled via Nepal-India borders. One-third of it comes through recycling of old gold jewellery in the market. The demand for gold in the domestic market has fallen sharply with demand having fallen to less than 10 kg of gold per day.
“The gold stock is running out and traders are bound to use smuggled gold due to which gold price has shot up,” said Shakya. He put the blame on NRB for the inordinate delay in its resumption of gold import even after the recent hike in customs duty. “About eight kilos of gold per day is being smuggled from across India,” he added.
The cabinet on March 14 decided to raise customs duty on gold by Rs 340 per 10 gram. Despite the decision to raise customs duty on gold from Rs 130 per 10 gram to Rs 470 per 10 gram, gold traders were hopeful of gold import resuming but to no avail.
To avoid the flight of capital NRB has stopped hand-carry process of gold import. Due to excessive gold import, the government moved to avoid dollar deficit. Before the ban, total gold imported was around 700 kilos via hand-carry.

#Gold import ban boomerang a big blow on goverment jaw
You May Also like: