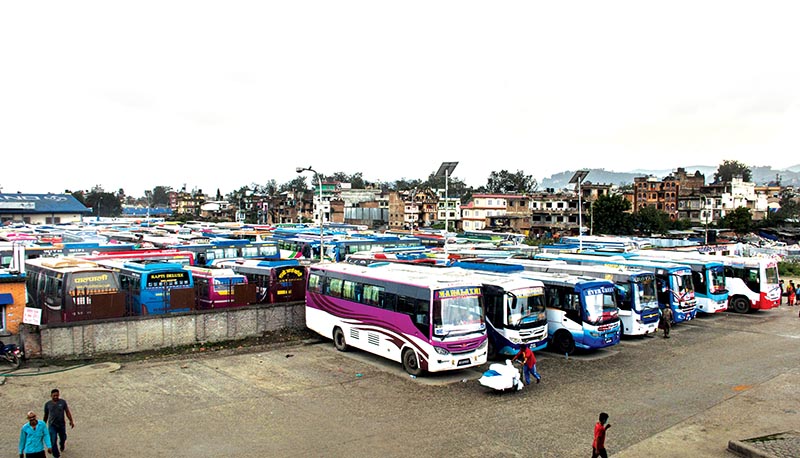 Kathmandu Dashain, the biggest festival of Nepalis is here and with it a huge chunk of Kathmandu’s population is preparing to leave the Capital for their hometowns. According to the Department of Transport Management (DoTM), more than two million people will be leaving the Valley during the festivals. In this exodus estimated 1.6 million people using public transportation (by road) while the rest will be travelling by air or in private vehicles. 6,000 public vehicles will provide transport facilities through different routes daily to facilitate the huge exodus of people out of the Valley. 12 help desks for passengers have been set up inside the Valley — a collective effort of Nepal Police, transport entrepreneurs and civil society representatives for the convenience of the travellers. Delayed bookings Although pre-bookings were supposed to start from September 7, transport entrepreneurs refused to open advanced booking on the said date. Pre-bookings were stalled in the light of demands made to the government authorities to allow the use of rooftops of vehicles to ferry passengers and store luggage, and to repair inland roads in rural areas and highways. “Driving on damaged and unpaved roads is very risky for the passengers and drivers alike. For example, the vehicles leaving for Eastern Nepal have to travel through Bardibas and the roads there are not wide enough to accommodate large vehicles,” quotes Biki Bhetwal, Booking In-charge of Naya Nepal Transport Enterprises Association. “Similarly, the condition of roads at Mugling-Narayanghat is at its worst possible. Commuters have to endure unending traffic jams. Well, we were hoping that the authorities would take notice and solve these problems before the rush for the festivals start,” adds Bhetwal. Speaking with THT Perspectives, Tokraj Pandey, Spokesperson at DoTM says, “The decision to remove the top carriage was made to mitigate road accidents that take place mostly because of overloading. Most vehicle owners allow passengers to travel on rooftop putting their lives at risk.” This year, the bookings opened on September 12 and it didn’t take long for bus tickets to sell out for almost all destinations outside Kathmandu. Consumers at a disadvantage “I was told that there were no tickets available and after much difficulty I managed to secure myself a seat on a bus,” says Bikash Nepali, who is set to travel to Dhangadi from the Capital. Citing that transport entrepreneurs increase transportation fare during festive seasons, he adds, “Everybody seems to be neglecting the need to manage a proper transportation system.” The government has fixed transportation rates for long and medium routes; however, there is 20 and 40 per cent increment in the regular fare for Deluxe and Air Conditioned buses respectively.  “I wanted to leave for home a bit early this year but the bookings hadn’t opened and I had to postpone my travel date. I did manage to get a ticket but only after I waited at the counter for two hours or so,” explains Kishor Magar, who is travelling to Gulmi for Dashain. “The authorities should look into increasing the number of vehicles given the rise in number of commuters. If there were enough vehicles to accommodate enough people; there would be no rush,” he suggests. According to Saroj Sitaula, General Secretary at Federation of Nepalese Transport Entrepreneurs (FNNTE), transport entrepreneurs have not added new vehicles into the transport system this year either. Consumer advocates have disapproved the decision of delaying the bookings. Stating the discrepancies in ticket bookings, Bishnu Prasad Timalsina, Secretary at Forum for Protection of Consumer Rights Nepal (FPCRN) states, “Many people cancelled their plans of travelling to their hometown this Dashain due to delayed bookings. Although the bookings have now opened, the departure and arrival time of the vehicles remain uncertain.” Lack of transparency and dissemination of incorrect information in terms of timings also add to the woes commuters face around this time of the year. 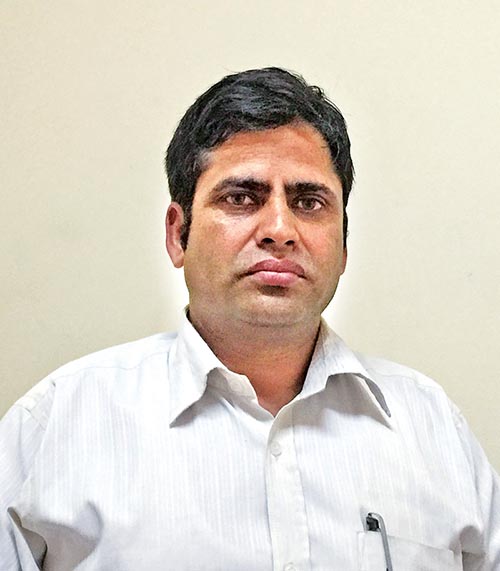 Management mess According to Lila Bhattarai, Assistant Sub-Inspector of Nepal Police, consumers from the Far-Western region suffer the most in terms of purchasing bus tickets because there is only one counter in Gongabu Bus Park selling tickets to their destination. She says, “There are nine districts in that region. It is advisable to have one counter or two districts at least. This would alleviate commuters’ problems significantly.” Mungling-Narayanghat Highway, Kulekhani-Dakshinkali Highway and BP Highway are the major arteries that go out of the Valley. That said, these highways are the most neglected in terms of regular maintenance; and passengers travelling these roads have to endure the worst traffic jams. Bhetwal says, “Our demand for better road facilities and better travelling conditions have been taken into consideration by the government but this is another case of too little too late. Although the construction of the highways and roads leading to the rural areas have resumed there is no way that it will be completed before the Dashain exodus begins.” Unsafe roads Every year ticket bookings for public vehicles start three weeks before Dashain, this year the counters opened only 10 days before the onset of the festival. When quipped about the delay, Sitaula answers,“Because of monsoon which lasted well into August this year work on the major highways and roads were brought to a halt. The bad conditions of roads after heavy rainfall and numerous landslides contributed to the delay in opening bookings for vehicles.” Sitaula believes that passengers this year are not as enthusiastic to travel outside the Valley as they were in previous years, he says, “The condition of the roads and the risk that comes with it have deterred drivers and passengers from travelling right after the monsoons. The government has hastily started working on the roads but it is too early to expect quick results.” 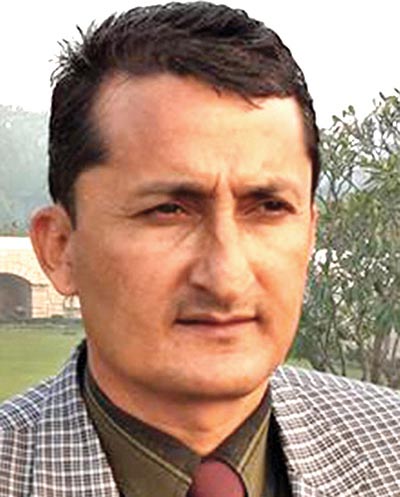 The situation now Following the lengthy disagreement between the DoTM and transport entrepreneurs, ticket bookings had been opened based on the agreement to repair roads in rural areas and granting the permission to use the roof of the vehicles to store luggage. “Road connectivity and physical infrastructure of our country is still underdeveloped and that is why implementation of development plans is difficult,” says Pandey. Deeming improved physical infrastructure as a long-term solution to travelling woes, he suggests, “The road networks need to be developed properly. In addition, public vehicles that ply these roads and serve commuters should also be upgraded and maintained to have efficient and hassle-free travel within the country.” On the other hand, Timalsina believes that the rush for tickets and the subsequent havoc that takes the market by storm is the transport entrepreneurs’ doing.  He says, “The transport entrepreneurs are here to run a profit and they make the most of consumer’s desperation to reach their hometowns for Dashain. They know that the demands they made, if not completely illogical, are somewhat impractical.” He elaborates, “The authorities cannot fix the roads overnight and the ban imposed on using rooftops for storage was a valid one keeping everybody’s safety in mind. That said, the government’s approach to solutions is lackadaisical. It has to monitor the situation all year round and not just when things start going out of control.” Every year, around the festive season, black marketers pose a major threat to vehicle owners, transport entrepreneurs and passengers but this year there has been no such noise in the market. That said, it remains to be seen whether this is a lull before the storm. With a couple of days left until Fulpati black marketers might just step up to fill the void left in the market due to shortage of bus tickets and to take advantage of the last minute rush like they do every year. Bhattarai begs to differ — she informs that the situation this year at ticketing counters is subdued and organised. “This year we have got fewer complaints regarding fraud, black marketing, along with robbery and lost possessions. We are here to serve the public and make their journey comfortable from the time they buy their tickets till the time they get on the bus,” says Bhattarai. Six to seven officials have been assigned at each help desk to help passengers. Similarly, the DoTM has allocated six inspection teams on different parts of the City to control fare fraud and black marketing of bus tickets. “Half a dozen people have already been penalised for not abiding by the law. A fine of Rs 5,000 is imposed of anyone flouting the rules. This directive has made it easier for us to control frauds and black marketers,” informs Pandey. While the question over the efficient transport and ticketing system looms large over people leaving Kathmandu to celebrate Dashain with their families, the future towards a competent travel network depends upon the government and transport entrepreneurs. More City dwellers are set to leave the Capital around September 24-September 27 from four check points. Reportedly, more than 400 vehicles are leaving Kathmandu from Gongabu Bus Park every day. Bus tickets to destinations across the country can be booked from Sundhara, Gaushala, Koteshwor and Kalanki besides Gongabu Bus Park.
#Kathmandu Valley #Department of Transport Management #transport entrepreneurs #Dashain #DoTM #Pre-booking #travel network
You May Also like: