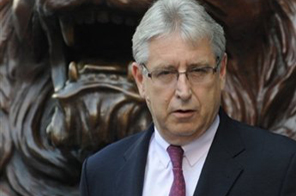 HSBC head Michael Geoghegan plans to delay any rush to expand the bank because of concerns over the global economy Source: AFP

HONG KONG: HSBC head Michael Geoghegan plans to delay any rush to expand the bank because of concerns there will be a second economic downturn in the coming months, a report said Monday.
"Is this a V recovery or a W?" the HSBC chief executive officer said in an interview with the Financial Times.
"(I think) it's the latter. (If I'm right), we have to be very careful we don't grow the balance sheet so far before the recovery has come only to write it back into the impairment line later on. I'm cautious about growing too fast."
His comments come after HSBC recently highlighted its ambitions for expansion in Asia by announcing that Geoghegan would move from London to Hong Kong.
The lender is expanding its branches in China and has expressed interest in a public listing in Shanghai.
Geoghegan was also bearish on the outlook for bank earnings.
"I'm not as convinced we're through the worst as others are. The reality is that profits will be quite reduced," he said.

#HSBC puts brakes on expansion over 2nd slump fears
You May Also like: