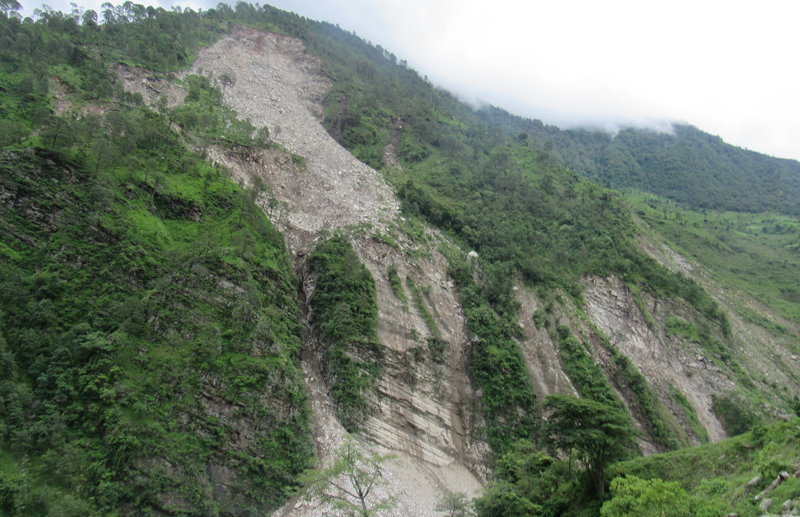 A landslide in Paima of Kailashmandau VDC in Bajura district in July 2016. Photo: Prakash Singh
Kathmandu, August 2 Floods, landslides and erosion have caused a huge loss in agriculture crops in recent weeks across the country. The Ministry of Agricultural Development (MoAD) has assumed the loss to be worth Rs 28.8 million in five districts. The MoAD, however, is yet to calculate the loss of paddy, which has been inundated by floods in various districts of Tarai because paddy fields that have been submerged by floods can only be examined after the water recedes, said Yogendra Kumar Karkee, joint secretary at MoAD. According to the agriculture ministry, it has received details of crops affected by floods, landslides and erosion from 22 districts but it was able to calculate the loss of only five districts. The losses incurred in the remaining districts can only be calculated after the flood water recedes from the paddy fields. “If the submerged paddy fields are damaged, there will be a huge loss,” said Karkee. Production of the agriculture sector is expected to rise in this fiscal due to timely monsoon, but the damage caused by the torrential rains may cause heavy losses. According to the agriculture ministry, there has been loss of crops worth Rs 4.8 million in Nuwakot district as the floods, erosion and landslides have affected maize, cardamom, vegetables and paddy in 694 hectares. Likewise, maize, millet, chilli, turmeric and banana fields in 347 hectares have been destroyed causing losses worth Rs 7.32 million in Ramechhap. Floods have destroyed 70 hectares of paddy fields in Surkhet and also destroyed fish ponds, which caused losses worth Rs 1.5 million. Similarly, 50 hectares of paddy fields in Parsa district have been damaged by floods accounting for loss of Rs 10 million, as per the agriculture ministry. In Bardiya district, floods have affected soybean farms, fish farms, maize and paddy that amounted to Rs 5.2 million. Likewise, 1,770 hectares of paddy fields in Jhapa, 100 hectares in Morang and 400 hectares in Sunsari have been submerged by floods. “In some of the locations, the paddy fields could have been covered by sand mounds which could result in a huge loss. We will have to wait till the flood water recedes in these places to be able to calculate the losses,” said Karkee. Paddy fields have also been inundated in Rautahat, Sarlahi, Nawalparasi, Kapilvastu, Kaski, Rupandehi, Banke, Dhanusa districts, according to the agriculture ministry. Paddy plantation carried out in 90pc of fields KATHMANDU: Paddy plantation has been carried out in 89.96 per cent of the paddy fields, which is a total of 1.43 million hectares, as of Monday. Paddy plantation has been completed in 88.76 per cent of the paddy fields in Tarai, which is also known as the rice bowl of the country. Altogether, 22 districts of the Tarai cover 70 per cent of the production area and an equal amount of paddy production in the country. The Tarai covers 984,339 hectares of paddy fields out of a total of 1.43 million hectares in which the crop is cultivated. Likewise, paddy plantation has been completed in 92.7 per cent of the paddy fields in mid-hills, where paddy is cultivated in 382,569 hectares, and 92.19 per cent in high hills where 58,438 hectares of land is utilised for paddy cultivation.
#landslides #floods #Ministry of Agricultural Development #Paddy Plantation #Rain #Tarai #MoAD #agriculture crops #agro loss
You May Also like: