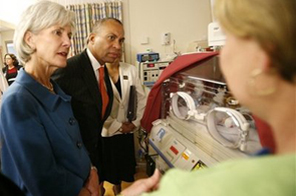 WASHINGTON: Employers would be required to offer health care to employees or pay a penalty and all Americans would be guaranteed health insurance under a draft bill circulated Friday by Sen. Edward M. Kennedy's health committee.
The bill would provide subsidies to help poor people pay for care, guarantee patients the right to select any doctor they want and require everyone to purchase insurance, with exceptions for those who can't afford to.
Insurers would be supposed to offer a basic level of care and would be required to cover all comers, without turning people away because of pre-existing conditions or other reasons. Insurance companies' profits would be limited, and private companies would have to compete with a new public "affordable access" plan that would for the first time offer government-sponsored health care to Americans not eligible for Medicare, Medicaid or other programs.
It all adds up to sweeping changes in how America's health care system operates and aims to achieve President Barack Obama's goal of holding down costs and extending health coverage to 50 million uninsured Americans.
It's already been known that Kennedy's health committee was planning to pursue most of the concepts outlined in the draft of the bill, called the "American Health Choices Act." But it's the first actual bill language to circulate since Congress began working on Obama's health care overhaul.
Congressional and interest groups officials cautioned that the language in the document was not final.
"It's a draft of a draft. HELP Democrats are still actively talking amongst themselves and their Republican colleagues," said Anthony Coley, spokesman for the Health, Education, Labor and Pensions Committee that's chaired by Kennedy, D-Mass.
Kennedy's committee is scheduled to begin voting on legislation later this month, as is the Senate Finance Committee, which has jurisdiction over tax issues. The House also will get to work soon to meet Obama's goal of passing legislation through both chambers by August, so the president can sign a bill in fall.
The draft bill sets up a system of state-level "exchanges," where people would go to shop for insurance plans and which would also oversee the marketplace. The federal-state Medicaid program for the poor would be greatly expanded.
Insurers would be required to pay for preventive care, and a new Medical Advisory Council would make recommendations on required health care benefits that would take effect unless Congress rejected them all at once — similar to how military base closures are handled.
The draft doesn't address how this would all be paid for. That remains a major sticking point.
The bill language became public on the eve of the kickoff of a national campaign to rally support for health care legislation that's being orchestrated by Obama's campaign team. Thousands of community events are scheduled around the nation Saturday where tens of thousands of people are supposed to discuss health care issues with their neighbors and create a groundswell for congressional action.
Yet many hurdles remain. Republicans are strongly opposed to a new public plan, especially the way Kennedy's bill designs it. Under Kennedy's bill the "affordable access plan" would pay providers 10 percent over Medicare rates, which would make it cheaper for patients, but harder for private insurers to compete with. Private insurers fear such a construct would drive them out of business, and there's even division within Democratic ranks.
That was underscored Friday in the House, as the liberal Congressional Progressive Caucus released a set of principles for how the public plan should operate that directly contradicted principles released Thursday by the Blue Dog Coalition of conservative Democrats.

#Kennedy bill would care employers
You May Also like: