'Made in China' now made in Egypt 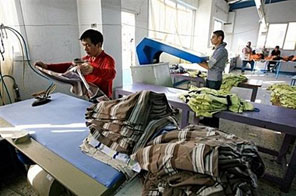 Employees work at the Nile Textile Group factory in the free zone of Port Said, 220 kms northeast of Cairo. With cheap labour, investment incentives and unrestricted exports, one Chinese textile group has turned to Egypt as an ideal location to produce its ready-made garments, beating stiff competition at home. Source: AFP

PORT SAID: With cheap labour, investment incentives and unrestricted exports, one Chinese textile group has turned to Egypt as an ideal location to produce its ready-made garments, beating stiff competition at home.
The Chinese-owned Nile Textile Group has set up shop in the Port Said free zone, overlooking the north entrance of the Suez Canal, and developed an industrial estate now hiring 600 workers, 20 percent of which are Chinese and the rest Egyptian.
Cheap raw materials and favourable export conditions have given the company easy access to foreign markets.
It's a bargain for the Nile Textile Group, which imports 60 percent of its basic products tax free and then sends them outside Egypt, mainly to the United States.
Most of their cut-price clothes are now labelled "Made in Egypt" rather than "Made in China".
"Egyptian free zones allow for export all over the world with almost no restrictions," said Mohammed Abdel Samie, the industrial estate's administrative director.
Local salaries are low enough to compete with those of Chinese workers, even with a system of bonuses offered to the Egyptian workers at the end of each month.
"In the factories where salaries are fixed, we earn a maximum of 700 to 800 Egyptian pounds (around 130 to 150 dollars) a month. In this company, it works out better for us," said factory manager Mansur al-Said.
In the neon-lit factories, Egyptian workers in headscarves work side by side with Chinese technicians in white blouses to the thumping sounds of the sewing machines.
Instructions are posted in Arabic and in Chinese.
As for the daily communication between colleagues, a little extra work was required.
"They taught me a few words of Chinese and they are learning Arabic," Leila Ali, a seamstress, told AFP.
Around 950 Chinese companies have set up operations in Egyptian free zones, representing a total investment of nearly 300 million dollars.
Most of them work in industry (526 companies), 306 companies are in the service industry, 31 in the agricultural sector and eight in tourism, according to Egypt's General Authority for Investment (GAFI) which oversees free zones in the country.
It is hoped the Forum on China Africa Cooperation (FOCAC), which kicks off on Sunday in the Red Sea resort of Sharm el-Sheikh and attended by about 50 states, will speed up the rhythm with the signing of a Chinese-Egyptian agreement to encourage more investment in the country.
The meteoric increase in economic cooperation between China and Africa in the last few years will be at the heart of the summit, which will be attended by Chinese Prime Minister Wen Jiabao and Egyptian President Hosni Mubarak.
Direct Chinese investment in Africa leapt from 491 million dollars in 2003 to 7.8 billion dollars in 2008. Trade between the two has increased tenfold since the start of the decade.
FOCAC is held every three years and this will be the fourth since it started in 2000.

#'Made in China' now made in Egypt
You May Also like: