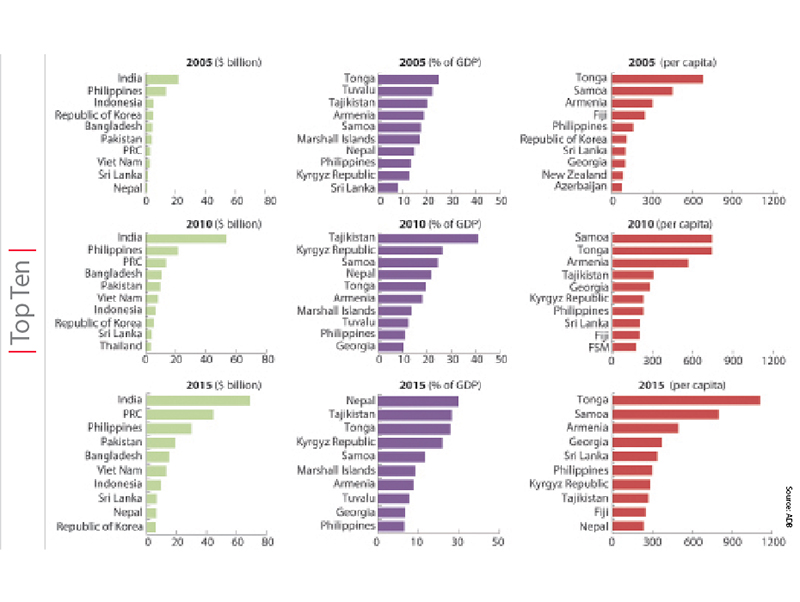 Kathmandu, December 6 As a proportion of the gross domestic product (GDP), Nepal topped the chart among top 10 inward remittance economies in Asia and the Pacific in 2015 due to recession in the Russian Federation and a spike in inflow to the country following the devastating earthquake. The country, however, stood second last in nominal terms and last in terms of per capita in the ranking last year. According to the ‘Asian Economic Integration Report 2016’, released today by Asian Development Bank, remittances and tourism receipts are an increasingly important and stable source of external financing for many developing Asian economies. On average, remittances in 2015 accounted for one per cent of GDP ($271.1 billion) in Asia and the Pacific including the region’s more advanced economies. The report has revealed that South Asia and Central Asia are most dependent on remittances. For example, remittance receipts in Nepal and Tajikistan reached 31.5 per cent and 28.9 per cent of their respective GDP in 2015. “A slowdown in remittances from the Middle East and the Russian Federation due to the oil price plunge and the economic slump underscores the growing challenges of economic diversification and strengthening competitiveness in these sub-regions,” the report says. The report looked into the top 10 remittance recipient economies in Asia and the Pacific in 2005, 2010, and 2015. In nominal terms, India was highest in all three years. The Philippines ranked second in 2005 and 2010, but fell behind China in 2015 amid low oil prices, which also affected the earnings of Filipino migrants from major oil-exporting economies in the Middle East. As a proportion of GDP, Tajikistan and the Kyrgyz Republic were highest in 2010, but they were overtaken by Nepal in 2015. In per capita terms, the rankings were dominated by the smaller economies in Central Asia and the Pacific in 2015, with Tonga, Samoa and Armenia topping the list. According to the World Bank, global remittances dropped 2.7 per cent in 2015 from 2014 and are expected to pick up at a weak pace of 0.8 per cent in 2016 against the continued backdrop of weak economic growth in source economies and low oil prices. “In addition, structural factors such as tighter bank controls to curb money laundering could make flows through informal remittance channels more attractive,” the ADB report says. “Tighter immigration and work visa policies also pose risks to remittance growth.” In this backdrop, the report has emphasised on strengthening trade linkages and attracting foreign direct investment (FDI) to contribute to regional growth and improve resilience to emerging protectionism. Asia and the Pacific continues to be world’s top destination for FDIs, which in 2015 reached $527 billion or nearly 30 per cent of world’s total. But in the same year, trade growth in the region decelerated to 2.3 per cent, below the 2.7 per cent growth in global trade. The report notes that the anaemic global economic recovery continues to weigh on the region’s trade growth, which continues to decelerate. “The structural transformation underway in China has also contributed to the region’s trade slowdown. The risk of rising protectionism has increased and non-tariff barriers have become major obstacles to trade,” the ADB report says. The report highlights that greater trade openness and FDI can strengthen region’s resilience to slow global growth, but countries need to improve their institutional quality, business environment, and policy effectiveness to encourage FDI. “FDI can contribute to economic growth through job creation, capital mobilisation, and infrastructure development, while promoting productivity through technological and knowledge spillovers. It also fosters inclusiveness through better working conditions and rising wages.” The report cautions, however, that the benefits of FDI are not automatic. “Different types of FDI will bring different benefits and what works in one country may not work for another.”