After braving years of slump in sales that had almost left the garment industry in tatters, manufacturers of Nepali apparels finally have a reason to rejoice, as US President Barack Obama signed the ‘Trade Facilitation and Trade Enforcement Bill’ into law yesterday.

The bill, which was endorsed by the US Senate in the second week of December, paves the way for certain Nepali exporters, including manufactures of apparels, to enjoy duty-free market access in the United States. 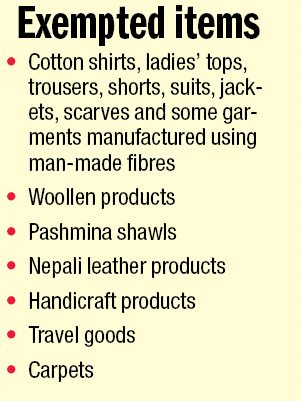 The legislation authorises the US government to extend special trade preferences to Nepal. Duty-free benefits will be granted to up to 66 different items, including certain carpets, headgears, shawls, scarves, leather products and travel goods.

Now that the bill has received the president’s seal, it is reported that a team of the US International Trade Commission will visit Nepal by mid-March to review the status of infrastructure and capacity of the country to utilise preferences extended by the world’s largest economy.

ITC is an independent agency of the US that provides trade expertise to both the legislative and executive branches.

It will submit its recommendations to the US president and the US Trade Representative because the US president must certify that Nepal meets the eligibility requirements of the programme, which are the same as those extended for African Growth and Opportunity Act countries.

The Nepal programme has been authorised for 10 years and designed to help revive the country’s economy that was shattered by the devastating earthquakes of April and May last year, after emerging from the decade-long armed conflict.

The programme grants duty-free benefits to Nepali exports not eligible for benefits under the General System of Preferences.

For the new trade preference programme to come into effect, certain administrative steps need to be completed in the United States.

Issuing a statement after the president’s seal on the bill, the US Embassy in Kathmandu said the US government intended to complete the procedural stipulations to bring the bill into effect as soon as possible.

The US government needs to request ITC to review the products covered by the preference programme to ensure that an increase in import of these products into the US market will not negatively affect the US economy.

These statutorily-required reviews may take several months to complete.

“This is a tremendous opportunity for Nepali businesses to expand their exports to the US markets,” the statement issued by the US Embassy in Kathmandu quotes Ambassador Alaina B Teplitz as saying.

“We look forward to learning more about Nepal’s plans for implementing the TFA and how the United States government can contribute to this goal.”

The new preferences by the US are expected to give new lease of life to Nepali garment industry, which is on the verge of collapse since the expiry of Multi Fibre Agreement, popularly known as quota phase out, in January 2005.

“We have to attract investment in this sector and focus on sustainability of the industry,” said Chandi Prasad Aryal, acting president of Garment Association Nepal.

After the expiry of MFA, the US government has been imposing around 17 per cent tariff on import of cotton apparels.

After the new law comes into effect, Nepal will be able to enjoy duty-free facility on export of garments till December 9, 2025.