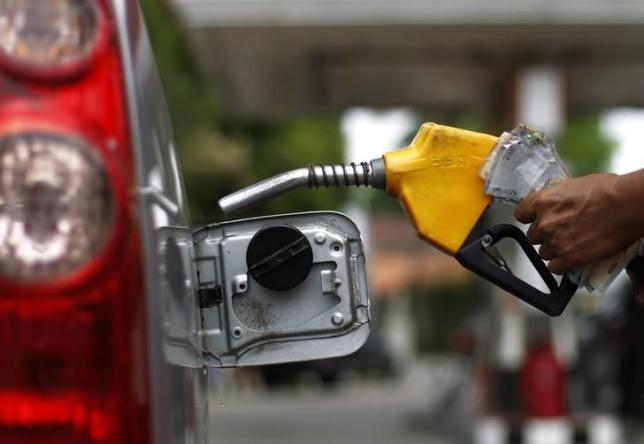 A worker fills a tank with subsidized fuel at a fuel station in Jakarta April 18, 2013. REUTERS
LONDON: Oil prices fell on Friday after Saudi Arabia dismissed the idea of an oil producer summit and as Goldman Sachs cut its crude forecasts. October Brent, the global oil benchmark, fell 65 cents to $48.24 a barrel by 0745 GMT after it settled up $1.31, or 2.8 percent, on Thursday. The October US crude contract fell 70 cents to $45.22 a barrel after settling up $1.77, or 4 percent, the session before. Saudi Arabia thinks a summit of oil-producing countries would fail to produce concrete action toward defending prices, sources familiar with the matter said on Thursday. The comments followed a meeting of Gulf Arab oil ministers with Qatar's emir in Doha, at which Venezuela's proposal for an OPEC and non-OPEC summit was discussed. Adding to the list of banks cutting their price forecasts, Goldman Sachs on Friday cut its 2015 WTI forecast to $48.10 per barrel, down from $52 per barrel. The bank also lowered its 2016 WTI price forecast to $45 per barrel, down from $57 per barrel. Goldman cut its 2015 Brent price forecast to $53.70 per barrel, from $58.20 per barrel. It saw 2016 Brent prices at $49.50 per barrel, down from its earlier $62 forecast. Oil prices rallied on Thursday after US Energy Information Administration (EIA) data showed demand for gasoline over the latest four-week period rose almost 4 percent from a year ago. Crude inventories rose 2.6 million barrels to 458 million barrels in the past week, compared with analysts' expectations for an increase of 933,000 barrels. Yet crude stocks at the Cushing, Oklahoma, delivery hub fell by 897,000 barrels to 56.41 million barrels, EIA said. "Crude oil stocks appear to be stabilising as refinery demand continues to fall, not surprisingly as refining margins have considerably weakened," BNP Paribas said in a note. Russia's energy minister expects cuts in global shale oil production to help stabilise the oil market. Alexander Novak also reaffirmed that Russia, one of the world's top oil producers, would not cut its own production. Asian shares edged higher on Friday following gains on Wall Street and a steady dollar, but gains were capped by uncertainty over whether the US Federal Reserve will raise interest rates next week.
#Saudi Arabia #oil price
You May Also like: