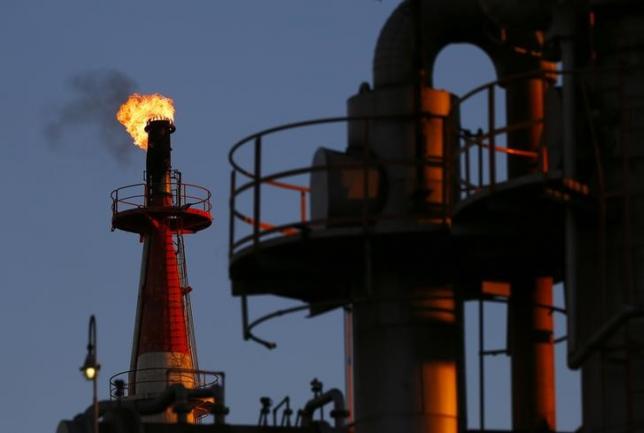 A flame shoots out of a chimney at a petro-industrial factory in Kawasaki near Tokyo December 18, 2014. REUTERS
SINGAPORE: Oil prices fell in Asian trade on Wednesday as concerns over global oversupply outweighed the impact of a likely larger than expected draw in US crude stocks and a weakening dollar. Asian investors focused on OPEC production figures that showed members of the Organization of the Petroleum Exporting Countries produced around 3 million barrels of oil per day more than daily demand in the second quarter, a Reuters survey showed. "Glut is the word," said Ric Spooner, chief market analyst at Sydney's CMC Markets. OPEC members pumped 31.25 million barrels per day (bpd) in the second quarter against demand of 28.26 million bpd, the Reuters data showed. Both Brent and US crude came off session lows on Tuesday after data from industry group the American Petroleum Institute showed US commercial crude stocks fell by 1.9 million barrels last week to 462 million, against analysts' expectations of a 184,000 barrel draw. "It was the first time since July 14 the market has seen any sign of a bit of a bounce, albeit temporary," Spooner said. The Department of Energy's Energy Information Administration will release official US oil inventory data later on Wednesday. Brent futures for September delivery fell 14 cents to $53.16 as of 0236 GMT after falling 17 cents in the previous session when it hit an intra-day low of $52.28, its lowest since Feb. 2, on concerns over China's stock market plunge. US crude for September delivery dropped 12 cents to $47.86 a barrel, after ending the previous session up 59 cents. Investors were also awaiting the outcome of a US Federal Reserve meeting later on Wednesday that could confirm a rise in US interest rates as early as September. A stronger dollar makes dollar-denominated commodities, including oil, more expensive for buyers using other currencies. Spooner expected the Fed to confirm market expectations of an increase in interest rates this year. "But the rate of increase will be very modest," he said. "My view is the dollar is positioned for a bit of a decline," because any hike had already been priced into currency markets, Spooner said. The dollar slipped against a basket of six major currencies in Asian trade on Wednesday, while the euro gained against the dollar. The dollar index fell to 96.505, or 0.27 percent, after closing up at 96.745 in the previous session.
#oil price #dollar #US crude stocks
You May Also like: