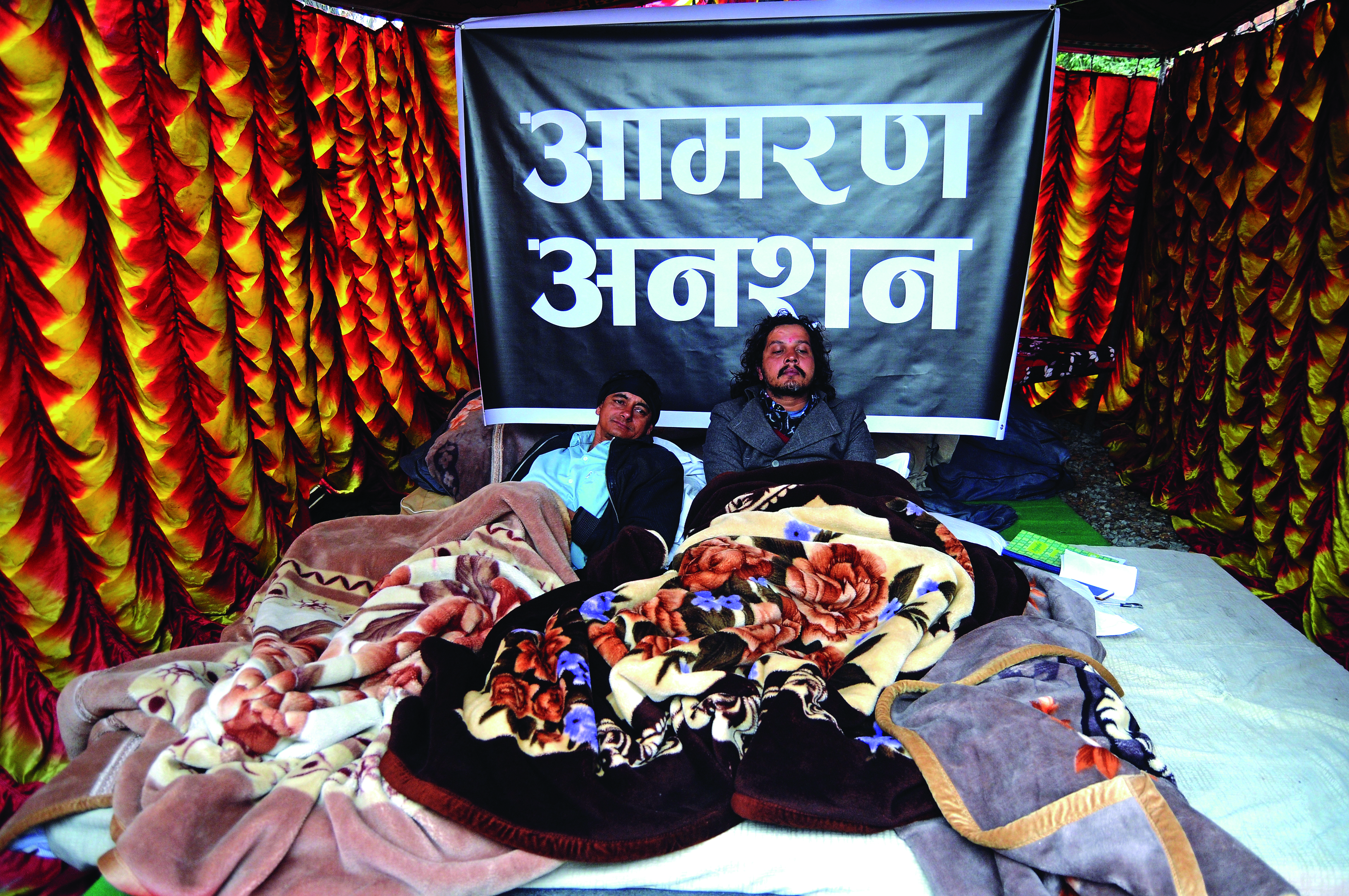 Investors staging a hunger strike at Nepse, Kathmandu, on Monday, December 17, 2018. Photo: THT
Kathmandu, December 17 Citing that the secondary market has not been serious in addressing their demands, a team of two share investors has started a hunger strike on the premises of Nepal Stock Exchange (Nepse) against top governmental officials from today. The share investors’ pressure group has demanded the resignation of Finance Minister Yubaraj Khatiwada; Governor of Nepal Rastra Bank Chiranjibi Nepal; Chairman of Securities Board of Nepal Rewat Bahadur Karki; Chairman of Nepal Stock Exchange Laxman Neupane and Chairman of Insurance Board Chiranjibi Chapagain. The team of Tilak Koirala and Hari Dhakal, representatives of the pressure group, has started a hunger strike stating that the above mentioned authorities are solely responsible for the current situation in the stock market. The share investors’ pressure group has also unveiled a series of protest programmes putting forth various demands. Their demands include reforms in the capital market, protection of investment and creating an environment conducive for investment. “We have started a hunger strike for the betterment of the stock market and we strongly demand the resignation of the aforementioned officials,” said the pressure group’s coordinator Hari Dhakal, adding that if the concerned officials do not resign they will not end the hunger strike. They have already been staging a relay-strike since the past eight days. “We have been compelled to launch protest programmes as the government has failed to address our demands,” said Dhakal. Earlier, the Ministry of Finance had formed a committee under the chairmanship of Shivaraj Shrestha, deputy governor of Nepal Rastra Bank, and comprising share investors, on Tuesday to identify the problems in the secondary market and provide necessary suggestions. “The committee was supposed to submit its report today but officials at the Finance Ministry refused to accept the report citing that more discussions need to be held regarding the issue,” said Uttam Aryal, chairman, Nepal Investors’ Association. Meanwhile, the protesters have accused the committee of ignoring their demands. They have also drawn attention of the government to introduce necessary act, regulations and laws for greater interest of capital market. In a recent development, the government and one of the pressure groups formed by the share investors had held a meeting at the Ministry of Finance on Friday where the government decided to address the demands raised by investors to increase margin landing. The government has also agreed to implement margin trading through brokers. However, dissatisfied share investors have stated that they will not end their protest programmes unless the government meets their demands too.
#Kathmandu #hunger strike #Nepse #Nepal Stock Exchange #Share investors
You May Also like: