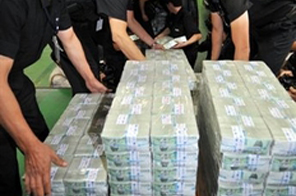 SEOUL: South Korea's central bank Friday froze its key interest rate at a record low 2.0 percent for the eighth month, saying it expects the economic recovery to continue but warning of uncertainties.

At its monthly policy meeting, the Bank of Korea left the benchmark seven-day repo rate for October unchanged.
It had cut the rate by a total of 3.25 percentage points between last October and February to try to ease a sharp economic downturn.
"In the coming months, the Korean economy is likely to maintain its growth trend (quarter-on-quarter), helped by the improvement in the world economic environment and rebuilding of inventories, but a number of uncertainties surround the actual pace," the bank said in a statement.
Inflation is likely to remain stable for some time, it said, and the country is expected to continue running a current account surplus.
The economy grew faster than expected in the second quarter, with gross domestic product increasing 2.6 percent from three months earlier.
Central bank governor Lee Seong-Tae suggested there is no hurry to tighten monetary policy.
"The growth of mortgage lending slowed recently, helped by tougher regulations," he told a press conference.
"It is too early to say housing prices are stabilising, but if stiffened rules are found to be effective it would lessen the burden for monetary policy authorities."
While there had been talk about the need to raise rates, that "doesn't mean we'll hike the base rate in the next month or so," Lee said.
An analyst at Moody's Economy.com said there are still expectations of a rate rise in November, with asset prices likely to force the bank to act earlier than it would like.
Property market activity is surging, said associate economist Alaistair Chan, and the central bank "does not want to have to deal with the potential mess from a house price crash."
However the economy remains fragile, Chan said in a commentary.
"A large part of the recovery appears due to the weak won. Expectations of monetary tightening has led the won to strengthen lately, and the (central bank) has reportedly tried to dampen this by intervening in foreign exchange markets."

#SKorea freezes key interest rate for eighth month
You May Also like: