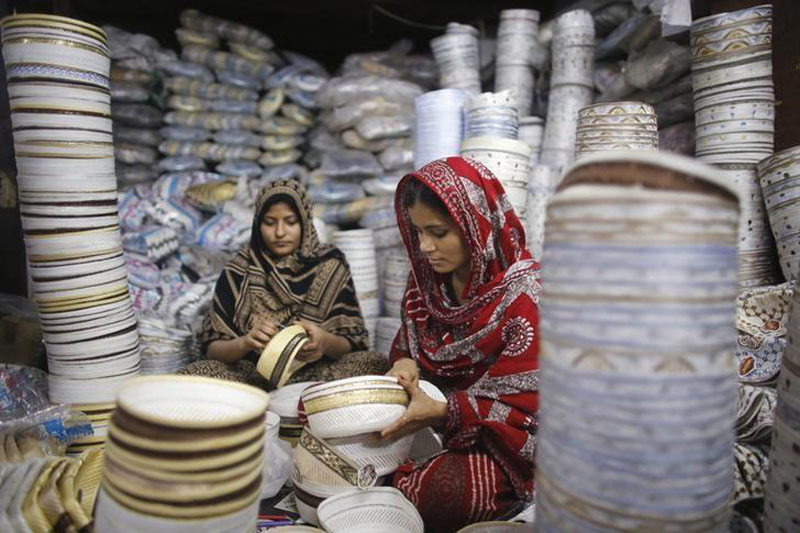 Workers sew prayer caps, which are high in demand during the holy fasting month of Ramadan, at a factory in old Dhaka, on July 10, 2014. Photo: Andrew Biraj/Reuters

The industry is already the most female-intensive in much of the region, women making up 71 percent of its workforce in Sri Lanka, 35 percent in India and 34 percent in Bangladesh. In Pakistan, its share of women workers is second to agriculture.

"South Asia needs to create jobs in labour-intensive industries where it enjoys a comparative advantage — such as apparel — to employ its burgeoning youth and attract more women into the workforce," the report released on Thursday said.

"South Asian households with women working, especially in the textile and apparel sector in India and Pakistan, tend to have fewer young children on average," it said.

South Asia is best placed to lure these businesses with its lower wages and expanding young population, even though recent industrial disasters have raised questions about safety and the conditions of workers in these countries.

The industry employs about 4.7 million workers in the formal sector, and several million more informally, making up about 40 percent of the region's manufacturing employment.

Its ability to lure unskilled and semi-skilled women is particularly important, as South Asia has one of the lowest female labour force participation rates in the world of about 32 percent, compared with East Asia's 62 percent, the report said.

Workers sew prayer caps, which are high in demand during the holy fasting month of Ramadan, at a factory in old Dhaka, on July 10, 2014. Photo: Andrew Biraj/Reuters

"The apparel sector offers a promising and realistic entry point for women into the formal labour force, thanks to a high wage premium compared to agriculture," the report said.

"As apparel exports increase, the rising demand for female labour pulls women from agriculture and other informal sectors."

Average wages in the industry range from about $0.51 per hour in Bangladesh to about $1.06 in India, compared with $2.60 in China, according to 2012 data compiled by the World Bank.

As output increases to meet higher demand, a 1 percent increase in the expected wage raises the likelihood of women joining the labour force by between 16 percent in Pakistan and 89 percent in Sri Lanka, the World Bank estimates.

Despite the large number of women the industry employs, however, female workers lack a voice and representation in Bangladesh, the region's largest exporter by value.

Regulatory capacity is also weak in Bangladesh, even though scrutiny has increased in the wake of the Rana Plaza disaster.

Three years after the disaster that killed more than 1,100 factory workers, the rights and safety of workers in the region are in greater focus, but progress in fixing problems in the supply chain is slow, experts and activists say.

In India, compliance is limited in the informal sector, where most workers are employed. Overtime is a serious problem, and child labour is common, with reports also of exploitation and sexual harassment of women.

In addition, the region faces growing competition from Southeast Asian countries including Cambodia, Indonesia and Vietnam.

But with stricter controls, better wages and higher-value products, South Asia's apparel and textile industry can retain its competitive edge, the report said.

"Given that much of apparel production continues to be labour intensive, the potential to create more and better jobs is immense," it added.