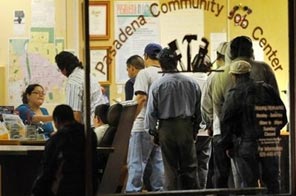 Job seekers line up before dawn to register at a community employment center, on October 2, in Pasadena, California. US officials have said President Barack Obama's stimulus plan has saved or created at least 650,000 jobs, and likely more than a million, as they battle a momentous unemployment crisis. Source: AFP

The White House said the new figures provided the first solid evidence from employers on job creation spawned by the 787-billion-dollar Recovery Act passed in February despite stiff opposition from Obama's Republican foes.

"I can say, and without fear of being contradicted by any responsible source, that so far, we have created over a million jobs," Vice President Joe Biden said.

"The fact of the matter is, we know that more jobs are on the way."

The latest measure of the economy's struggle to emerge from the crisis comes a day after government statistics showed 3.5 percent GDP growth in the third quarter after a painful year of contraction.

Republicans, however, accused the administration of making up job creation numbers "out of thin air" to disguise the failure of Obama's economic policies.

Data posted on Recovery.gov, the website of the independent panel overseeing the stimulus measure, showed 640,329 jobs directly saved or created up until September 30.

Since the survey data only accounts for half the spending during that time, officials say the true number of jobs created is over a million.

In a first for a federal government program, Americans can log on to the site and pinpoint exactly how many taxpayer dollars are being spent on a downloadable map specific to their neighborhoods.

Obama has vowed that the economic recovery package would save or create 3.5 million jobs over two years, and officials argue Friday's figures will show them on pace to meet that goal.

The statistics were provided by tens of thousands of state and local governments, private firms and universities and detail how around 150 billion of 339 billion dollars have been spent.

They related to jobs created on projects like infrastructure, construction on highways and account for education jobs saved or created with the use of stimulus money.

Unemployment remains a key hurdle to sustained recovery, with the latest monthly figures in September pushing the jobless rate to a new 26-year high of 9.8 percent, with job losses accelerating to 263,000.

Government data showed Thursday that the US economy had emerged from the deepest recession in decades, but the White House continues to battle crushing unemployment of just under 10 percent.

The numbers apply to jobs directly created with Recovery Act funds, but officials say more jobs are also created indirectly, for instance in the retail sector, when these people spend their wages.

The official release ignited a new row between the White House and its political foes.

Mitch McConnell, leader of Republicans in the Senate said it was "bewildering" to see the administration "claiming it created one million jobs, especially since it is a sad fact three million jobs have been lost since the stimulus was signed into law."

Christina Romer, chair of Obama's Council of Economic Advisers, warned Thursday that the US unemployment rate is likely to remain "severely elevated" for some time even as the economy recovers from recession.

The recession's impact on employment has been massive, making it difficult to recoup lost jobs, she told a congressional panel.

#Stimulus plan created one million jobs
You May Also like: