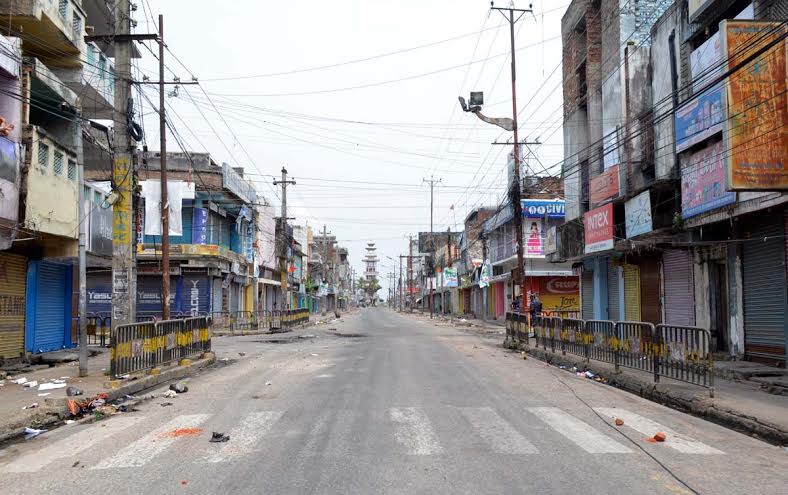 A road wears a deserted look due to curfew in Birgunj on Thursday, September 3, 2015. Photo: Ram Sarraf
Kathmandu: As if limited resources, crippling power outages and high cost of importing raw materials were not bad enough, the prolonged political turmoil in Tarai districts has added to the headache of exporters. With the movement of vehicles pretty much brought to a standstill, they are worried that their failure in transporting the cargoes in timely manner to their buyers in third countries will dent their earnings. Reportedly, third country buyers normally charge 25 to 30 per cent of the export amount as compensation from the suppliers if their orders are not delivered on time.Problems like lack of empty containers and insecurity in transporting the cargoes have crippled the country’s export since a few weeks back, along with the growing tension in Birgunj area. Inland Clearance Depot (ICD) Birgunj is the only rail-linked ICD from the Kolkata port, which is the sole gateway for the country’s third country export and import. Hence, more than 80 per cent of the country’s exports depart through Birgunj-Raxaul customs point. “The current political situation has made it extremely difficult to transport cargoes to Birgunj from different parts of country, and it’s even harder to get the truckers to agree to transport cargoes to Kolkata port,” said Rajan Sharma, president of Nepal Freight Forwarders’ Association (NEFFA). “Due to the strikes and bandhs, it will take more time to collect the numbers of containers to meet the criteria fixed by railway, so to ensure timely delivery of goods to the third country buyer, we are trying to send it via road.” Normally, at least 15 to 20 containers or half of the rake is compulsory to ship cargoes through rail. Some of the exporters are using the Bhairahawa-Nautanwa route due to the growing tension in Birgunj since about a week back. But, Nautanwa customs office has yet to issue customs transit declaration (CTD) so that the trucks/containers can travel to Kolkata port for shipment of cargoes. Since Bhairahawa-Nautanwa route is seldom used for export, Nautanwa customs office is not equipped to issue CTD. The Central Board of Excise and Customs of Indian government has made arrangements for CTD from Raxaul (Birgunj), Jogbani (Biratnagar) and Panitanki (Mechi-Kakarvitta) customs points. “Officials of the Nautanwa customs point have said that they have sought permission to issue the CTD from their higher authority and are awaiting consent,” said Sharma. Even as the government has provided escorting services for import of essential goods by deploying security forces, the same facility has not been extended in export. Containers unloaded in different parts of the country are yet to be sent back to Birgunj. Consequently, the shipping lines in Kolkata will charge high detention fees from the importers. Now, the anxiety among exporters is the delay in delivery of the order of their third country buyers. It normally takes 38 to 40 days to deliver cargoes to Europe and 50 to 55 days to the United States. The bank of the buyer normally gives payment once the Nepali exporter submits the required documents like CTD, among others, as a proof that their orders have been shipped. In case of delays, exporters have to compensate their buyers. Anup Bahadur Malla, chairperson of Export Promotion Committee at the Federation of Nepalese Chambers of Commerce and Industry, said that the government should provide proper security for the vehicles used for the purpose of export to ensure timely delivery of buyers’ order. Delays in the delivery of goods from Nepal will ultimately damage the reputation of Nepali suppliers and it will be a setback for the country’s export sector, according to Malla.
#tarai bandh #Federation of Nepalese Chamber of Commerce and Industries (FNCCI) #Nepal exports #Nepal Freight Forwarders’ Association (NEFFA)
You May Also like: