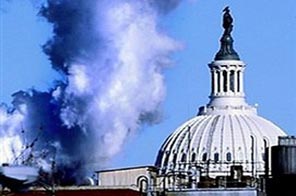 Representatives from the world's 17 biggest carbon polluters are due to kick off a week of high-level and high-stakes talks on climate change at a meeting in Washington that aims to generate momentum for a much heralded meeting in Copenhagen. Source: AFP

WASHINGTON: Representatives of the world's 17 biggest carbon polluters were due Thursday to kick off a week of high-level and high-stakes talks on climate change at a meeting in Washington.

The aim of the talks, which will be held for two days at the State Department before moving to New York next week and then to Pittsburgh, is to try to patch up differences and generate momentum for a much heralded meeting in Copenhagen in December, where a UN conference hopes to produce an ambitious new pact rolling back global warming.

The meetings come as Washington tries to resume a leadership role on climate change, and follow a warning from UN chief Ban Ki-moon that world leaders need to "get moving" on climate change.

"It is absolutely and crucially important for the leaders to demonstrate their political will, leadership, and to give clear political guidelines to the negotiators," Ban told British newspaper The Guardian Wednesday, adding that he was "deeply concerned" that talks on global warming are not making much headway.

The Guardian also reported that Europe has clashed with the US administration over how to cut emissions and tackle global warming -- reports which, if true, suggest talks will be tense over the next week.

The European Union, France, Italy, Germany and Britain will be among participants at the talks at the State Department, along with Australia, Brazil, Canada, China, India, Indonesia, Japan, South Korea, Mexico, Russia, South Africa, and host, the United States.

Participants at the talks are part of the Major Economies Forum on Energy and Climate, an initiative launched in March by US President Barack Obama, who has made a U-turn from the stance on climate change held by his predecessor George W. Bush.

In July, Michael Zammit Cutajar, who chairs the UN Framework Convention on Climate Change (UNFCCC) working group on long-term cooperative action, said the United States has undergone an important mood-shift and is on the path toward "strong climate action."

"The mood is completely different now... There's a sense that the country's on the move toward strong climate action," he said, weeks after the US House of Representatives approved a bill that sets long-term limits on greenhouse gas emissions, a prime contributing factor to global warming, and aims to shift the US economy to one that runs on cleaner energy.

But in spite of the mood shift, finding common ground with other nations has not been easy -- and that could mean difficult and even inconclusive talks in Washington, New York and Pittsburgh.

Last week, the US Special Envoy for Climate Change, Todd Stern -- who will represent the United States at the talks in Washington -- told the House Select Committee for Energy Independence and Global Warming that persistent disagreement between developed and developing nations has kept an international solution on climate change at arm's length.

The main aim of the week of meetings in the United States is to chart a path towards success at a major UN climate change conference due to be held from December 7-18 in Copenhagen.

Nations at the Copenhagen conference are supposed to craft a pact for curbing global warming beyond 2012, when Kyoto Protocol obligations on cutting emissions expire.

Denmark, the host of the December meeting, will attend the talks at the State Department, as will the United Nations.

Failure to tackle climate change at a key UN conference in Copenhagen could be "catastrophic" for health, the heads of 18 doctors' associations also warned.

In an exceptional joint appeal published in the British Medical Journal (BMJ) and The Lancet, they called on governments to act decisively to roll back the threat from global warming.

Scientists have repeatedly warned climate change could affect health in many ways, ranging from malnutrition caused by drought to the risk of cholera from flooding and the spread of mosquito-borne disease to temperate zones.

#World's key polluters start climate talks in US
You May Also like: