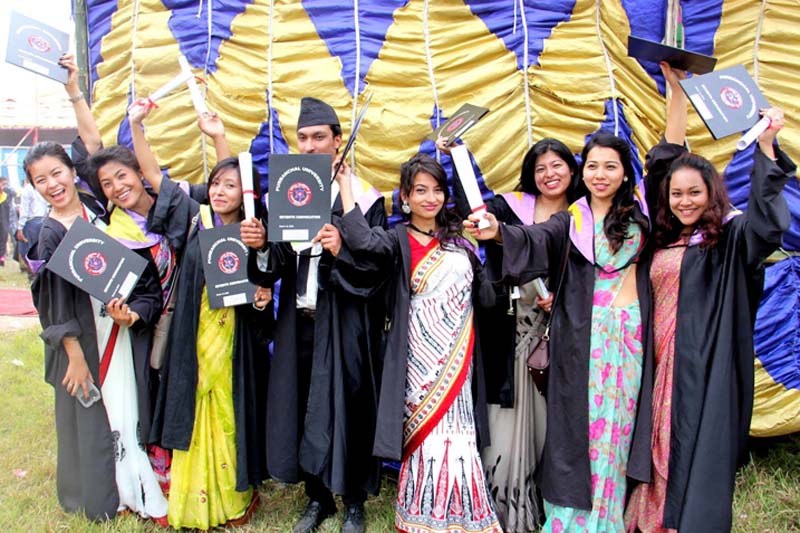 Every time she looked at photos of convocation of her uncles, dad, or elder sibling hung on the walls of her house, Alisha Shrestha "wondered when I would be able to take a photo like that".

That day finally came for the graduate of Bachelor of Fashion Design (BFD) from Namuna College of Fashion Technology on March 14, 2015 as she became a part of the seventh convocation of Purbanchal University (PU), held in Biratnagar.

Shrestha and her friends planned weeks before for the convocation. Donning sari and looking their best, they attended the event. After the ceremony, she took a photo like that of her other family members.

"I was excited about the graduation ceremony as we had to go to Biratnagar. At the venue it was a proud and happy moment as that happiness was evident on my parents’ face too," she expressed about the event.

It’s not only Shrestha, every student wishes to be a part of their university's convocation day — be it after completing a bachelor's degree, master's level or P hD. In his/her best attire, donning black coat, along with hat (for some) and certificate in your hands to prove that you have graduated, Convocation Day is a proudest moment in every student's life.

Convocation is incomplete without the black robe and cap (for some levels). Artist Sujan Chitrakar, Academic Programme Coordinator of KU Art+Design shares that the gown is worn "to show uniformity among the graduates and to let others know that the gown is only for those who have earned their degree".

"Everyone — including guests and other people who are on the stage — wear the similar robes on the day of convocation, symbolising the students’ are now in equal status as the dignitaries," he shared the robe’s meaning.

And every student desires to throw their caps in the air after the convocation but not all can enjoy the privilege. Maharjan wanted it too but "in TU there is no provision of cap for the graduates of Master's and Bachelor's levels. Students should be allowed to wear caps during the convocation of Master’s level as we don't get to put it on during the graduate ceremony of Bachelor’s level".