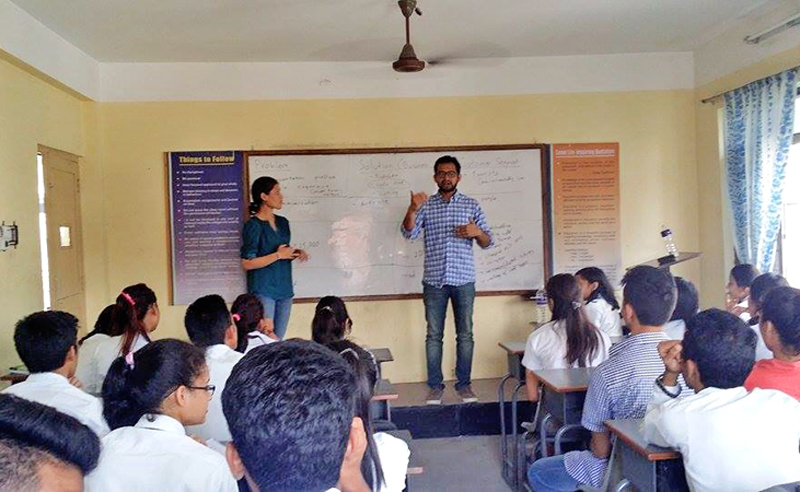 Courtesy: Comilina Bajracharya
KATHMANDU: It is good to have one’s own business — along with earning money for yourself, you are able to provide employment opportunities to others too. For example, in developed countries like Japan, students do not pursue higher education directly. Instead they take vocational trainings, so that later in future they can start something of their own. It is one of the reasons for the minimum number of unemployed people there. Likewise, to encourage students to become Nepal’s young entrepreneurs, Young Leaders Entrepreneurship Forum (YLEF) and Entrepreneurship Management Club (EMC) of Prime College recently conducted a workshop at Prime College, Khusibu. The programme aimed at highlighting the importance of entrepreneurship in the development of Nepal and providing skills to help students start their own small businesses. The workshop was conducted by Prasit Dhakal and Sonu Shrestha on behalf of YLEF on September 1. The event lasted for about an hour and featured group activities that proved to be fruitful and innovative for students. The workshop was based on business model called ‘Lean Up’ — various examples were given to explain the model. One such example was about the popular social networking site Facebook. The students came up with various project ideas related to day-to-day incidents as well as the nation’s burning issues like drug abuse, load-shedding, et cetera. Sumit Sagar Kachhyapati, Deputy Vice- President of EMC, gave the presenters a token of love and the programme ended successfully and effectively.