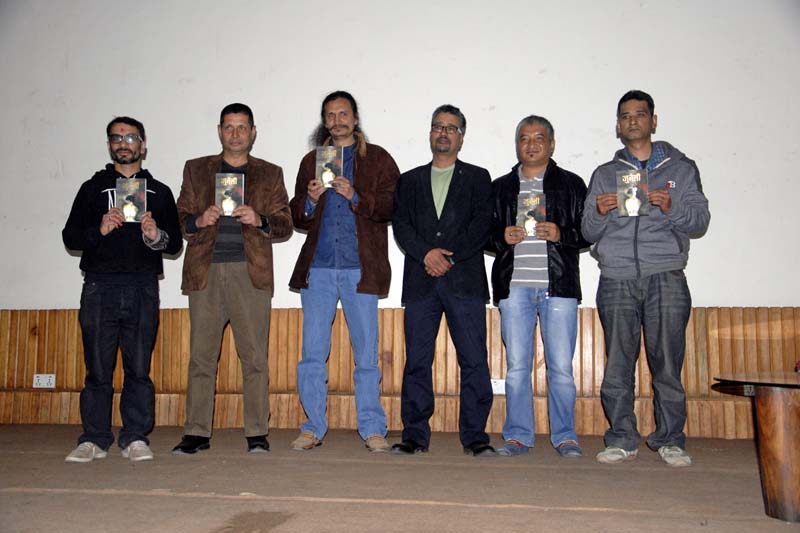 Photo: Bal Krishna Thapa/ THT
KATHMANDU: A doctor (Nisha Adhikari) and patient (Gaurav Pokhrel) are seen talking. The doctor is asking her patient about his career as a writer. It’s a scene from a short film based on the first chapter of Juneli — a novel written by actor, director, and writer Brajesh Khanal. The short film, directed by Khanal, was screened at Moksh, Jhamsikhel on February 13, the occasion was the launch of this novel. Soon after the film’s screening, all the audience were asked to check under their chairs — five of them found books underneath their respective chairs. These five people were called on stage to launch the book. With this interesting launch, Khanal’s Juneli is now available in the market. It is a sequel to Khanal’s first novel Yayawar. The script writer of hit Nepali films like Crorepati, and Nepali Babu among others, Khanal expressed, “Juneli is one character in Yayawar, and I had talked less about her in that book. But the readers frequently asked me about her, which made me realise that I need to write about her.” Thus, Juneli was written. It has been published by Book Hill Publication. Author Nayan Raj Pandey termed the way of novel writing as “unique”. He stated, “The way of writing and revelation of the story is unique in the novel. There are many layers in this story and the novel has been concluded beautifully.” Meanwhile, journalist Rabindra Mishra said, “Written in simple language, the book has the capacity to touch readers’ heart. The novel is complete in itself.”
#Nisha Adhikari #Gaurav Pokhrel #Juneli #Brajesh Khanal #Yayawar
You May Also like: