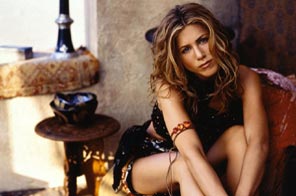 LONDON: Gerard Butler wooed Jennifer Aniston with a ceramic chicken.
The 39-year-old actor stunned his 'The Bounty' co-star with the thoughtful gift during their first day of shooting the new movie.
A source said: "Jennifer and Gerard already knew each other quite well after meeting several years ago through friends in Hollywood. On the first day of making 'The Bounty', Gerard had remembered that Jennifer had once told him she collected chicken memorabilia for her kitchen, so he bought her a ceramic rooster and gave it to her on set - she loved it!"
Gerard and Jennifer have not yet confirmed they are dating, but have been seen on a series of romantic dinner dates.
While promoting his last movie 'The Ugly Truth', Gerard refused to be drawn on their relationship, but did speak glowingly about the 40-year-odl actress.
He said: "She has a lot of sexy things about her. She's really down to earth and very sharp and witty."

#Butler gifts Aniston a ceramic chicken
You May Also like: