Cosby's wife must give deposition in civil suit, judge rules 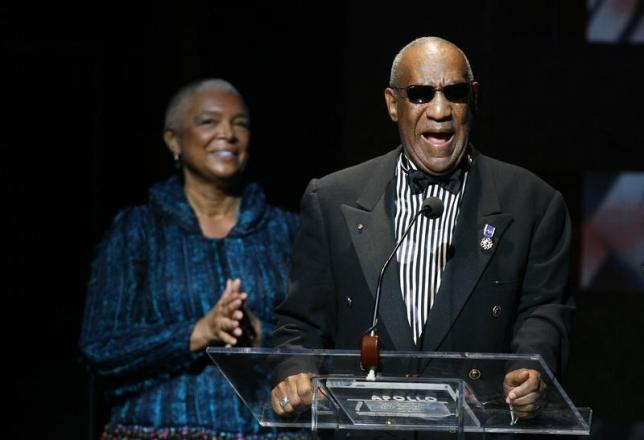 Comedian Bill Cosby addresses the crowd in front of his wife, Camille Cosby, after being honored during the Apollo Theatre's 75th anniversary gala in New York, June 8, 2009. REUTERS
BOSTON: Bill Cosby's wife will have to talk to lawyers bringing a defamation lawsuit against the comedian but cannot be compelled to reveal private conversations with her husband, a federal judge in Massachusetts ruled on Thursday. Cosby's attorneys had asked that his spouse of 52 years and business manager, Camille Cosby, be allowed not to give a deposition in connection with a civil suit brought by seven women who have accused the man, once one of the United States' most beloved entertainers, of sexual assault. U.S. District Judge Mark Mastroianni ruled that Camille Cosby could be deposed but would have the right not to answer some questions. Cosby's lawyers had argued that there was a risk to her reputation if intimate details of the couple's relationship were revealed. "The right to refuse to answer certain deposition questions does not entitle a deponent to 'refuse to appear for any deposition whatsoever,'" Mastroianni wrote. "The court is not convinced that deponent should be permitted to avoid her deposition altogether or that its scope or timing should be modified." More than 50 women have publicly accused Cosby - best known for his role as the father in the 1980's television hit "The Cosby Show" - of raping them, often after plying them with alcohol or drugs in instances dating back decades. Most of the alleged assaults are too old to be criminally prosecuted, but Pennsylvania officials late last year charged the 78-year-old entertainer with sexually assaulting a women in 2005, with those charges coming just days before the statute of limitations was to expire. Cosby has repeatedly denied wrongdoing, but a Pennsylvania judge early this month rejected Cosby's request to dismiss the charges. The Massachusetts lawsuit was filed in December 2014 by Tamara Green and later joined by six other women who contend Cosby sexually assaulted or abused and defamed them by calling them liars. Cosby's attorneys welcomed Mastroianni's order, calling it in a statement a "critically important decision by the court today ... affirming the confidential nature of and protection afforded to marital communications." Cosby's lawyers asked a judge on Tuesday to put the lawsuit on hold until the criminal charges were resolved. The court has not yet ruled on that.
#Bill Cosby #defamation lawsuit
You May Also like: