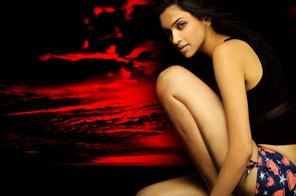 MUMBAI: Guess where Deepika Padukone is going be this weekend?

In Abu Dhabi, that’s where. Not shooting for some Arabian adventure film in the capital city of the UAE, but, well, watching the Abu Dhabi Grand Prix live on Sunday.

This is the first Grand Prix at Abu Dhabi and marks the climax of the 2009 F1 World Championship. The venue is the Yas Marina Race Circuit off the coast of Abu Dhabi where a 500-bed, five-star hotel straddles the race track. And where F1 fans can walk upto the paddocks from the hotel itself.

Deepika, an F1 fan apparently, will be Vijay Mallya’s luck mascot for his racing team. The King of Good Times had the dimpled Bollywood beauty specially flown down after he heard that she cherished the desire to catch an F1 race live. As his special guest, Deepika will watch the season finale race from Mallya’s VVIP box.

The liquor baron, incidentally, has always had Bollywood stars as his guests at Grand Prix events. Earlier, it was the Sen sisters Raima and Rima. Don’t know whether her presence tomorrow at Abu Dhabi will spur Mallya’s F1 drivers to step on the gas and aim for a podium finish, but with all the rumours doing the rounds on Deepika’s breakup with beau Ranbir Kapoor, this mini holiday may in fact be that much needed breather for the actress.