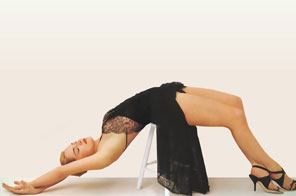 LOS ANGELES: Sharon Stone refuses to go out without make-up as she worries her fans would feel let down if they saw pictures of her not looking like a star.
Sharon Stone feels she has a duty to her fans to wear cocktail dresses in public.
The 51-year-old actress insists her supporters would feel let down if she was ever pictured with no make-up and a casual outfit, even when not working.
She said: "When you show up in photos for your fans, they don't want to see you looking a disaster.
"I think that's disrespectful to them. You're the one going home in your nice car to your nice house because your fan has worked all day at the factory or in the store to make you a star. I'm incredibly grateful to them for staying with me."
The 'Basic Instinct' actress also tries to choose as diverse a range of film roles as possible because she feels she has a responsibility to her fans to try and give them value for money when they see her movies.
She explained to Tatler magazine: "The decision to spend your money on my film is a real decision. You're saying you trust me and I'm going to give you a good time at the movies.
"Every day I think about that. That's why I make unexpected choices in the parts I play - people don't need to see the character being predictable.
"You've got to get past your own ego and your own sense that you're such a big star to be a star that matters."