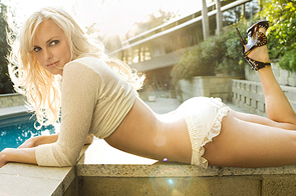 LONDON: Actress Anna Faris and her new husband Chris Pratt were in Bali, Indonesia for a friend's wedding when they decided to exchange vows themselves.
The stars were so moved by their pal's nuptials they tied the knot in a small traditional Balinese ceremony in July (09) after all their friends had left to return home to the U.S.
Faris reveals there were only two others present for the intimate wedding - a local priest and a hotel employee who filmed the romantic event for the couple.
She tells U.S. talk show host Ellen DeGeneres, "We got married in July in Bali. We were actually there for a friend's wedding and all our friends left and then we were like, 'Let's do it'.
"The hotel offered a Balinesean-style ceremony. They throw things like rice and water and flower petals on you... I had no idea what was going on.
"It was the two of us, the Balinesean priest and a guy from the hotel filming. It was great, it was really spontaneous."
The Scary Movie star insists she has no regrets about eloping - and her mother and father are equally as happy about the minimal cost of the wedding.
She adds, "I told my parents and they were like, great! My mum was happy we didn't spend much money!"

#Friend inspires Faris to marry
You May Also like: