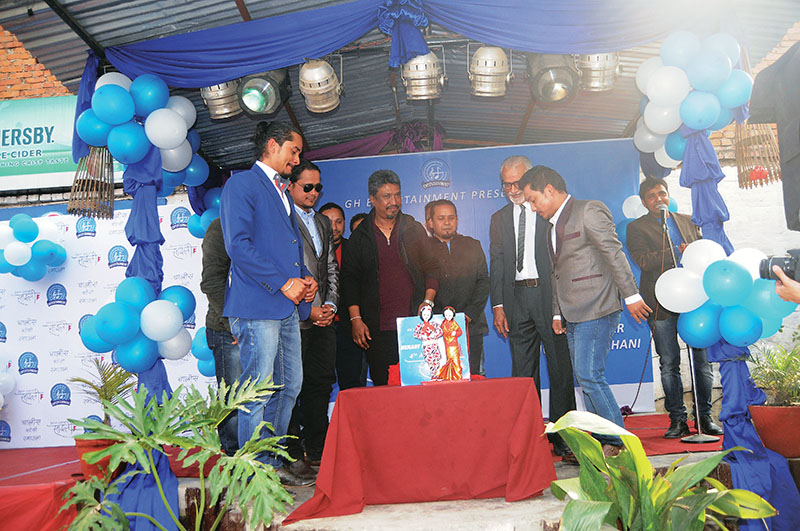 Photo: THT
KATHMANDU: Saili — a song that tells the story of a husband who leaves home and beloved wife for foreign employment, and promises to have fun after his return after 40  — is one of the most trending Nepali songs on YouTube right now. This title track — sung by Hemant Rana, and composed by Kali Prasad Baskota — gained much attention even before the release of the album Saili. The album was launched on February 18 at The Society Lounge Bar, Hattisar. Singers Rana and Sandeep BK, actors Tika Pahari and Gaurav Pahari, and musician Nhyoo Bajracharya jointly launched Saili. The album has eight songs — Pipalu Chautari, Bhana, Timi Navaye, Aina, Bokshi, Jiwanko Kahani, Beglai Sansar, and the title track Saili. Along with Rana and Baskota, Sunni Sunam and Kalyan Singh are the composers of the songs in the album. Himal Saud, Sunam, Rana and Baskota have penned the songs. Bajracharya, who likes Rana’s song Laija Re, praised the singer, “He has sung a few songs yet he has made his mark in the music industry by singing them in his unique style.” And he lauded the song Saili, “After I heard Saili I burst into tears. His (Rana’s) singing style and lyrics touched my heart.” On the audience’s requests, Rana sang a few lines of Saili, while crediting Baskota for giving him the “opportunity to sing Saili”. Though he admitted, “We didn’t know that Saili would be so popular.” Along with the song, its music video featuring Gaurav and Menuka Pradhan as husband and wife has been equally popular among viewers. The duo’s “realistic performance” has contributed to the song’s popularity, as per actor Deepak Raj Giri, along with the issue it has touched. “The song, which talks about the plan of husband and wife ‘to enjoy life after 40’ depicts our society’s reality. We (Nepalis) are forced to leave our country to earn money — and thus people can connect with this song,” Giri analysed the song, while expressing, “I hope it would break the record of Surke Thaili from Chhakka Panja.” Saili is the first production of GH Entertainment — an entertainment company founded by Rana, Gaurav and BK — that plans to work in film and music sector. Sharing the story behind album Saili, Gaurav revealed, “We registered the company two years ago. When Hemant told us he wanted to release new album, we thought it is a good opportunity for our company to produce such a good singer’s album.” And thus, Saili was born. Rana has now plans to release the music video of Bokshi. Saili is Rana’s fourth album. His other albums are — Paap Punya (2005), Laija Re (2010) and Mero Aakash (2012). His Sufi style songs Paap Punya and Laija Re are very popular among listeners.
#Kali Prasad Baskota #Saili #Hemant Rana #Nhyoo Bajracharya #Society Lounge Bar #Sandeep BK #Tika Pahari a #Gaurav Pahari
You May Also like: