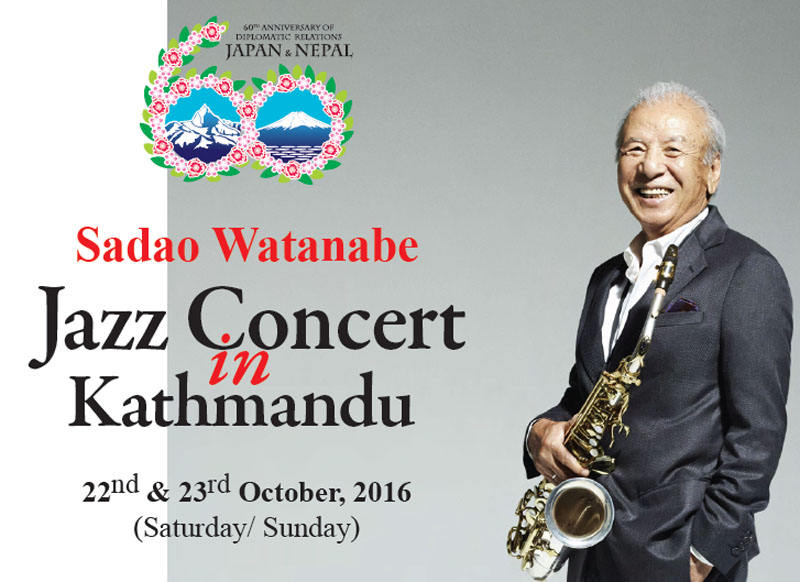 Sadao Watanabe Jazz Concert in Kathmandu on October 22 and 23, 2016.
KATHMANDU: The Japanese Embassy in Kathmandu is going to organise the Sadao Watanabe Jazz Concert in Kathmandu on October 22 and 23. The function is being organised on the occasion of 60th anniversary of the establishment of the diplomatic relationship between Japan and Nepal, according to a press release issued by the Embassy on Monday. The concert is going to be organised at the Tribhuvan Army Officers' Club, Tundikhel in Kathmandu. The event aims to promote Japan and its traditional as well as contemporary cultures in Nepal, according to the statement. It would feature the world-renowned Japanese jazz artist Sadao Watanabe and his group consisting of keyboardist Akira Onozuka, guitarist Takashi Yofu, bassist Koichi Osamu, drummer Masaharu Ishikawa, and percussionist N’diasse Niang, stated the press release. It is also mentioned in the press release that the Embassy of Japan hoped that the concert would further promote cultural ties between Japan and Nepal, and contribute to an ever-growing friendly and cooperative relationship. Japan is the seventh country that Nepal has its diplomatic ties with. The two nations had established the link on Septemer 1, 1956.
#Japanese embassy #Tribhuvan Army Officers Club #Nepal Japan diplomatic relation #Sadao Watanabe Jazz Concert #Sadao Watanabe
You May Also like: