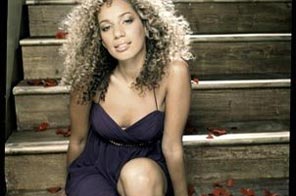 Singer Leona Lewis has rebelled against her squeaky clean image by getting her first tattoo.
The well-behaved Bleeding Love hitmaker has managed to keep out of the headlines for any reckless rock and roll behaviour since winning Simon Cowell's U.K. TV talent show The X Factor in 2006.
But now the pop star is showing off a rock and roll streak after having a tattoo inked on the inside of her left wrist in tribute to her boyfriend Lou Al-Chamaa.
Keeping coy about its significance, Lewis says, "It's incredibly private and something that we both had done. It's Hebrew letters and I'm thrilled with it. I can't reveal what it is. Some things need to remain private for me."
The couple shares a residence in London, but Lewis is currently based in the U.S. as she works on her forthcoming album Happy.

#Lewis shows off first tattoo
You May Also like: