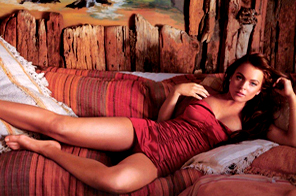 Lindsay Lohan’s hard-partying ways have caused her more legal woes, after Los Angeles police ticketed her for a noise violation at the weekend (begs20Jun09).
The Mean Girls star outraged her Hollywood Hills neighbours, who flooded the Los Angeles Police Department with complaints the 22 year old was playing loud music into the early hours of Sunday morning (21Jun09).
According to TMZ.com, authorities responded at 4.20am local time by issuing the actress a ticket for excessive noise.
The actress, who has spent time in rehab, was arrested twice in 2007 on drink driving charges.
She is currently under investigation by London police in connection with the theft of jewellery worth $45,000 (£30,000) from a shoot with Elle magazine earlier this month (Jun09).

#Lohan ticketed for noise violations
You May Also like: